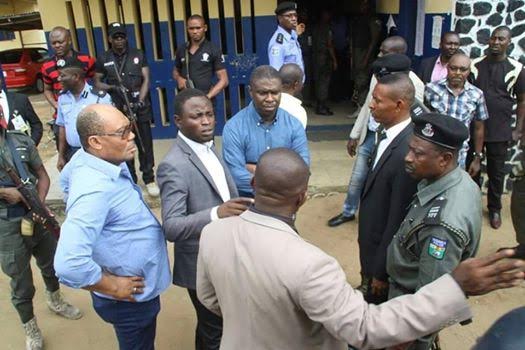 River State Government has debunked claims that Governor Wike’s Chief of Staff, Chukwuemeka Woke was arrested over an attempt on the life of NIMASA DG, Dakuku Peterside. The statement issued by Senior Special Assistant to the Rivers State Governor on Social Media, Oraye St. Franklyn claims that it was actually Chief Woke who was shot at by Dakuku’s security agents. 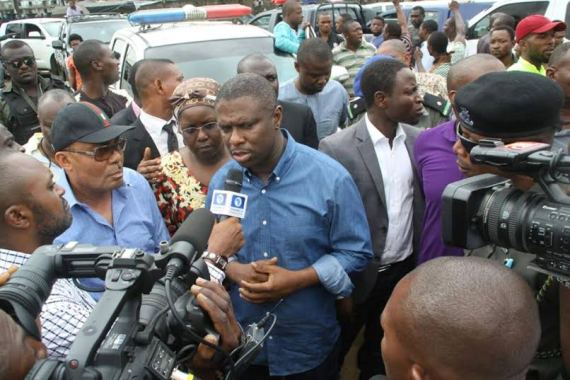 According to what they said, Chief Woke was driving along Forces Avenue, old GRA, Port Harcourt when the vehicle he was driving in was shot at by security agents attached to Dakuku. Woke sped into the compound of the Department of State Security Services (DSS) in order to escape his attackers. (pictured is Woke talking to the press at the DSS office)Below is the statement accompanied with photo evidence: 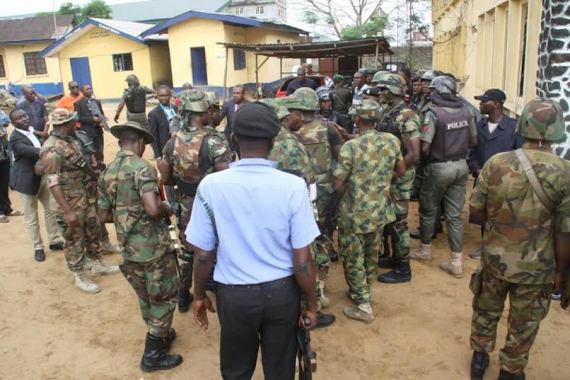 SAHARA REPORTERS AND THE INVOCATION OF THE ABSURD TO EXCUSE DAKUKU’S CULPABILITY
The infamously dubious online news medium, Sahara Reporters in its characteristic nature has issued an absurd report of pure falsehood riddled with undiluted malice and mischief to malign the character, name and reputation of Engr. Emeka Woke, the Chief of Staff Government House, Port Harcourt, purporting that he carried out an assassination attempt on the life of Dakuku Peterside, the defeated Rivers State APC Governorship candidate.
Nothing can be more bespeaking of the grandeur of the absurd. The narrative concocted by Sahara Reporters is intended to excuse the evil plots of the cultic characters that parade themselves as leaders of the All Progressives Congress (APC) in Rivers State.
There’s absolutely no way, the Chief of Staff who moves without security can effectively commandeer the assassination of Dakuku Peterside, who himself invaded the Mile 1 Police Station in commando style today to release a detained corrupt INEC official with a little less than 100 soldiers on this very day. It is just unthinkable.
The most presumable fact is that Engr. Emeka Woke must have been believed to be conveying the election results from his home town Emohua to the INEC headquarters in Port Harcourt prompting the evil attack on him to retrieve the papers. This is the only logical consequence, given the fact that a similar attack was carried out on an INEC van along Airport road today by men loyal to Rotimi Amaechi and Dakuku Peterside.
It is therefore the most depressing evil for Sahara Reporters to present a false account to the public when an innocent man is battling for his life.
The desperation being shown by the Rivers State APC should not be given cover by misleading and false news headlines. The entire country has seen that the trio of Rotimi Amaechi, Dakuku Peterside and Ibim Semenitari are at the heart of the ensuing violence and restivity in Rivers State in a bid to win the Court-ordered rerun elections at all costs.
Sahara Reporters must endeavour to be a true partner for social reengineering by promoting truth and justice rather than make itself available to the dictates of fat-chested warmongers. The entire story as reported by Sahara Reporters is false, baseless and inciting anarchy in Rivers State. The Chief of Staff, Government House, who is a victim of gunviolence should not be victimised by might of pervading media. Truth must be protected and promoted.
Dakuku’s security attacked the Chief Emeka Woke. Dakuku Peterside knows this to be true which is why he was prompt to claim assassination on his part, having reasonably failed to apprehend the Chief of Staff. Dakuku Peterside must be invited for questioning on the matter and it is condemnable and most unconscionable that he claims to be a victim of assassination in spite of the army of security at his beck and call including the dare-devil FSARS, DSS, Police and the Military; the magnitude of which no Nigerian Governor is privileged to have.
The state of the Chief of Staff is unknown. He was not arrested by the Department of State Security. We call for prayers for him.
Advertisements