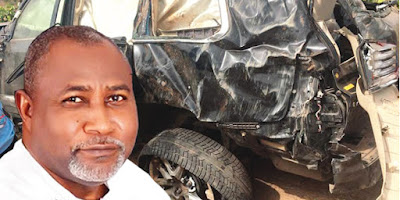 Kazeem stated this Abuja on Sunday, March 13 in an interview with the News Agency of Nigeria. According to him, the news making round in the social media that Elegbede, driver of the ill-fated vehicle that claimed the lives of Ocholi and his family members has a driver’s license is not true.
“Elegbede is not captured in our driver’s licensing data, so the license he claimed to have expired must be a fake one. Our license procedure includes physical presence and biometric capturing of applicants which is permanently stored in our data bank, for the purpose of verification. We always tell members of the public to visit our licensing centres spread across the country and desist from patronizing touts while applying for their driver’s license. Elegbede can not be called a competent driver if he does not have a genuine driver’s license, which he can only acquire showing mastery of basic driving principles.
Reacting to the claim that the vehicle(Lexus 570 SUV) the driver was driving was one given to Ocholi from the office of the Head of Service and that he wasn’t allowed to examine the car, Kazeem said:
“A good driver must perform a routine check on his vehicles before driving out, it is not an excuse to say because the vehicle was provided by another office and he should ignored a check on it. Infact, the maintenance department could not claim in-culpability as a result of receiving the vehicle from another agency or department, the more reason, why proper check should be carried out as the vehicle is changing hands.”
Kazeem said the commission while wishing Elegbede a speedy recovery, urged members of the public to only engage the service of a genuinely licensed driver to avert road carnages.
James Ocholi, his wife and a son died in an accident along Kaduna-Abuja Highway on Sunday,March 6, while the driver and the Orderly sustained serious injuries.
LIB recalls that Elegbede’s colleagues at the transport department of the Ministry of Labour and Employment had earlier debunked the claim that he had no license saying that Elegbede is a licensed driver who had served the ministry for over 25 years. They said Elegbede’s driver’s license expired on January 15th 2016 and he had applied for another one.
Source: NAN