Former Inspector General of Police and Chairman of Arewa Consultative Forum (ACF), Alhaji Ibrahim Ahmadu Coomassie is canvassing a drastic reform of the political process and the judicial system. 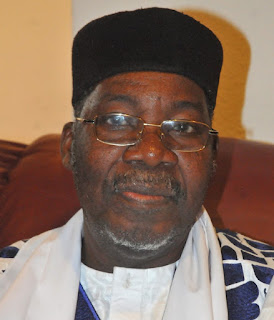 Top of the political reform Coomassie wants is the removal of public office holders’ immunity, which, according to him, will help in sanitising the electoral process and reduce abuse of office.

He spoke at the International Conference on ‘Deepening Democracy Through Elections in Nigeria: An Assessment’ organised by the Department of Political Science and International Studies of Ahmadu Bello University (ABU), Zaria.
The ACF Chairman who chaired the conference said the political reform has become imperative to safeguard the nation’s democracy.
Citing the 2015 elections, the former IGP said: “From one source alone, a staggering $2.1billion earmarked for procurement of arms to fight insurgency in the North-east was diverted to secure the electoral victory of the PDP.
“Indicators suggest that most government agencies and departments were forced to cough out funds to aid in the electoral victory of the PDP, making it the most expensive election in the nation’s history.
“Now that we have a new government in place, which campaigned for and won because it promised change and is therefore amenable for the reform of the whole political processes. We must avail ourselves with the opportunity to make far-reaching reforms that will safeguard this democracy.”
On the immunity clause, the former IGP said: “It is time to expunge this immunity clause in the constitution or amend it to give the President and Governors only immunity from civil litigations. This is one of the many steps that will help sanitise not only the electoral process, but reduce the abuse of office that have become the hallmark of elected public office holders in Nigeria.
“As chief law officers, they are expected to be above board. From 1999 to date, this has not been the case. The democratic process has been characterised by impunity, disregard for service delivery and high levels of corruption.
“Similarly, the Buhari administration should as soon as possible initiate a major reform of the judicial processes in Nigeria. Nigeria inherited the judicial system from the British at independence and since then, it has undergone minimal reforms.
“Matters before our law courts suffer long and unnecessary delays. Prosecutors of criminal offenders suffer great frustrations at the court, especially when serious cases before our eminent jurists get thrown out on simple technicalities.
“Strict penalties should be introduced for all electoral offences. After more than 50 years as an independent nation, and after several tries at the democratic governance, Nigeria must once and for all get her acts together. After 17 years of uninterrupted civil rule, Nigeria’s democracy can no longer be described as an experiment We must strive to consolidate this gain by not only making sure that our electoral processes are fool proof, but that attempt to tamper with them will meet the full wrath of the law.”
The ACF Chairman also called for abolition of the State Independent Electoral Commissions saying local government elections should be conducted by the Independent National  Electoral Commission (INEC)  which should  computerise all electoral processes to allow for absolute credibility.
Earlier his address, ABU Vice Chancellor, Professor Ibrahim Garba said it was time for the academia to rise up and shape public discuss through conferences like this.
According to him, the academia, especially political scientists have a duty to examine and analyse the fierce struggles leading to primitive accumulation of wealth and  have resulted in contemporary class conflicts, ethnic violence as well as the present phase of insurgency which is threatening national security.