The Edo State Governor, Adams Oshiomhole, has been conferred with an honorary doctorate degree in Public Administration by Samuel Adegboyega University, Ogwa, Edo State.
He was awarded this degree over the weekend at the school’s convocation, where the Vice Chancellor, Professor Benard Aigbokhan, acknowledged the governor’s significant role in ensuring the smooth take-off of the university.
This fact was further emphasized by Dr Ebenezer Okebukola, the Chairman, Board of Trustees, of the university, who also spoke at the occasion.
“The unquantifiable contributions of Governor Oshiomhole led to the development of Samuel Adegboyega University,” he said.
His wife, Iara, was on hand to show her support. 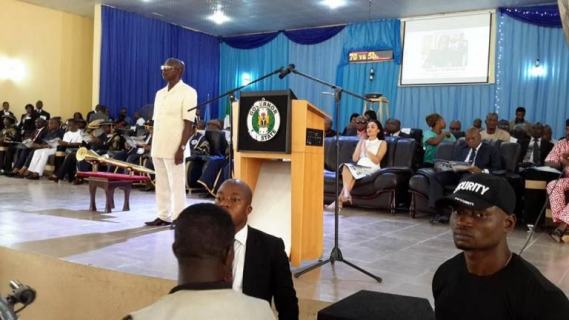