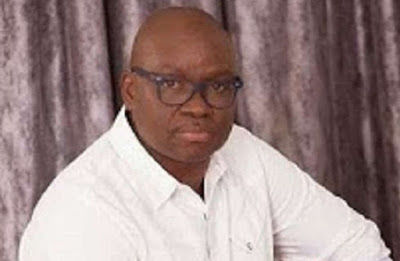 Armed policemen from Abuja have now invaded Ekiti State to begin indiscriminate arrest of Peoples Democratic Party (PDP) leaders, top government officials and 11 members of the State House of Assembly under funny allegation of stockpiling arms during the June 21, 2014 governorship election.
The policemen were led by one CSP Mohammed Abubakar of the Force Criminal Investigation Department (CID), Abuja.
Special Assistant on Public Communications and New Media, Lere Olayinka, who made this known in a statement issued on Tuesday, said the new plot was an aftermath of the failure of the Department of State Services (DSS) to achieve the plot of coercing the House of Assembly members to impeach the Governor, Mr Ayodele Fayose.
The government said the indiscriminate arrest was to begin this night and that the policemen arrived Ado Ekiti, the State capital with Mr TKO Aluko and APC Chairman, Jide Awe today.

“We are aware of the arrival of policemen from Abuja to Ekiti State with the intention of arresting 11 members of the House of Assembly, two PDP leaders per local government and some other top officials of the government.

“Ridiculously, the offense for which the policemen are to embark on this indiscriminate arrest is owing to TKO Aluko malicious outburst that those listed for arrest stockpiled arms during the governorship election conducted in Ekiti close to two years ago.

“This plot is in furtherance of the APC plot to destabilize the government of Ekiti State just because of Governor Fayose’s hard stance on President Mohammadu Buhari’s APC government policies”.

“The question is, what was the arms they claimed were stockpiled used for? Was anyone killed or attacked during the election?

“And why is the Police not arresting the APC Chairman, Jide Awe who is wanted for alleged murder and TKO Aluko, who was declared wanted by the court for perjury, and instead providing security cover for them?

“We therefore which to alert Nigerians on this new plot and state that Ekiti people will resist any attempt to use the Police to harass innocent citizens of the State.

“Democratically, we are entitled to our views on any issue in Nigeria and we won’t succumb to intimidation and harassment from any agency of the Federal government.”