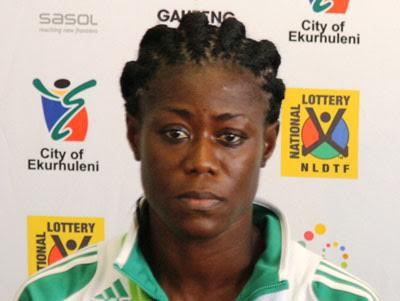 36 year old Super Falcons goalkeeper Precious Dede has retired from the female national football team after a career spanning 15 years that has seen her participate in four women World Cups, three Olympic Games and four AWC, which she won in 2010 and 2014.
Dede disclosed that she decided to quit after the African Women Nations Cup 2014 in Namibia but later changed her mind. But that after 15 years with the  National team, it was time she focused on other things.

“I feel that I have tried after 15 years with the national team. For me that is a very good record, and it was about time I left the stage for the younger ones. They are equally good, they can carry on”.

“ I wanted to quit before the last World Cup, but I was asked to come back and play”, she added.
“ It was very disappointing (Falcons performance at Canada 2015) because I’d thought we had what it took to get as far as the final or even the semis, but I thank God though.”
Dede played 99 times for the national team and says she will enter the fashion world after retirement