We are ‘One American family’;US President Obama tells Muslims 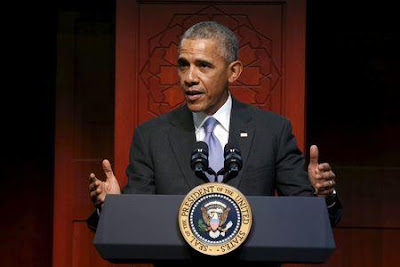 US President Barack Obama visited a Maryland mosque on Wednesday to deliver a simple message at a complex time. “We are one American family,” President Obama told the gathered crowd at the Islamic Society of Baltimore. “We will rise and fall together.”

Obama sought to reassure Muslim Americans that the country considers their community essential to the makeup of society, condemn the claim that all Muslims are terrorists, call on the Muslim community to also condemn terrorism, affirm religious freedom, and explain to the whole of America what Islam is and isn’t.
And with the rise of ISIS and in the wake of the attacks in Paris and San Bernardino, the president had a lot of ground to cover in the 45 minutes he had to speak.

“We have to reaffirm that most fundamental of truths—we are all God’s children, all born equal with inherent dignity,” Obama said. 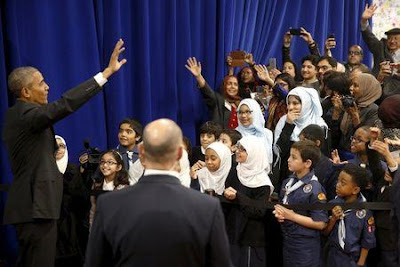 He started by telling the story of Islam in the U.S. from a historical perspective, bringing the audience back to the nation’s founding. “Islam,” Obama said, “has always been a part of America.” Muslim slaves ripped from Africa and brought to the U.S., Obama said, did not leave their religion at the shore. He added that religious liberty guaranteed in the Constitution didn’t come with an asterisk, quoting Thomas Jefferson’s declaration that “the Jew and the Gentile, the Christian and Mahometan [or Muslim]” were all to be protected.
Looking out across the room, he marked the contributions of Muslims within American society. He asked the service-members in the audience to stand and thanked them for their service. He cheered Ibtihaj Muhammad, the champion fencer who will become the first U.S. athlete to compete while wearing a hijab during the 2016 Summer Olympics.

“Muslim Americans are some of the most resilient and patriotic Americans you’ll ever meet, he said.

And through the personal letters he gets from Muslims of all ages across the country, he noted the fear many feel just being themselves.
President Obama spoke of a mother whose “heart cries every night” thinking about how her child could face taunts and bullying at school. 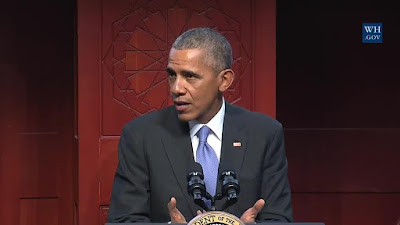 He mentioned a 13-year-old girl from Ohio who simply wrote, “I’m scared.” Before the speech, the president got a sense of how Muslims are feeling first hand. He sat down with about a dozen people from across the country for open dialogue about the state of their community. 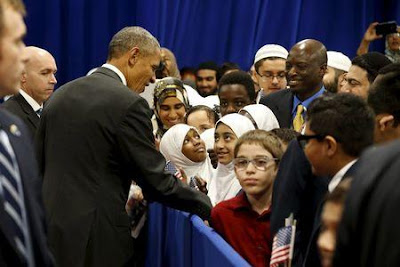 Obama slammed “inexcusable” anti-Muslim rhetoric. “An attack on one faith is an attack on all our faiths,” he said. “We can’t be bystanders to bigotry. Together, we have to show that America truly protects all faiths.”
The president’s historic first visit to a mosque while in office had been long awaited by many, but for some—like Sabah Muktar, the young woman who introduced the President on Wednesday, it came just in time.

“This visit by our president is an affirmation to all Muslims we are just as American as any other,” she said.