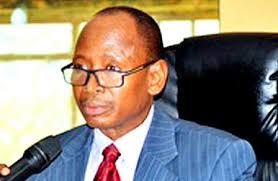 Alhaji Ahmed Idris
The Office of the Accountant-General of the Federation (OAGF), yesterday said it has mopped up N2.3 trillion  into the Treasury Single Account (TSA).
Its Director of Funds, Mr. Mohammed Dikwa, disclosed this at the opening session of the workshop on TSA in Abuja.
He said with over  17,000 bank accounts being operated at the federal level in commercial banks, government had no choice but to introduce the TSA which has so far helped in mopping up about N2.3trillion into the various accounts maintained and operated at the  Central Bank of Nigeria (CBN).
In similar vein, the Accountant-General of the Federation (AGF), Mr.Alhaji Ahmed Idris, said 98 per cent of the Ministries, Departments and Agencies (MDAs) have complied with the TSA.
He said following government’s February last year directive, all federal MDAs are now on TSA operating their account successfully through the CBN.
Idris said: “As at December 2015, 726 MDAs, which are responsible for almost 98 per cent of the national budget have complied fully.”
According to him, the challenges encountered in the adoption of the TSA were entrenched resistance from banks and the MDAs, which the Federal Government has now overcome.
With the massive compliance, the AGF noted, the new challenge is that of capacity building , and the application of information technology (IT).
In her opening remarks, the Minister of Finance, Kemi Adeosun, who was represented by Mr. Adeseye Shefuye said the  balance, which changes daily as MDAs remit revenues and make payments, according to the latest reports from CBN exceeded N2.2 Trillion.
She said: “I can report that work is now ongoing within the Treasury, to determine how much of these funds can potentially be utilised to part fund the 2016 budget and how much relates to pending commitments. This, of course, will reduce the amount to be borrowed.”
TSA, she said,  has provided government with financial information on the revenues of agencies funded by government and has reduced revenue suppression.
She noted that the information is being used to drive government’s programme to enforce compliance with the Fiscal Responsibility Act and ensure that revenue generating agencies generate expected surpluses and remit to the Federation Account.
Mrs Adeosun said: “TSA has eliminated opportunities for brokerage and other corrupt practices that previously encouraged agencies to accumulate funds with commercial banks rather than apply them to their intended uses.