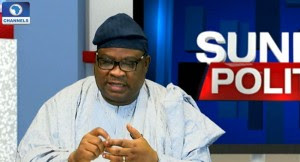 Special Assistant to the Ekiti State Governor on Public Communications and New Media, Lere Olayinka has described the expelled former State Secretary of the Peoples Democratic Party (PDP), Mr TKO Aluko as a new distraction from the All Progressive Congress (APC) in Ekiti State, saying he does not deserve response from sane minds.Olayinka said Aluko was already beclouded by his desperation to seek revenge against Governor Ayodele Fayose because of the governor’s refusal to make him his Chief of Staff, such that he (Aluko) was not mindful of committing the criminal offence of perjury.
The governor’s aide who said it was shameful that the APC have refused to accept a scandalous electoral defeat they suffered 19 months ago, asked whether it was also soldiers that rigged the 2015 presidential, senatorial, house of representatives and State House of Assembly elections that the party lost woefully in Ekiti. He said;

“For Aluko to be taken seriously, he must first have to report himself to the police to be tried for perjury and committed to prison for three years, since what he is now saying is different from what he said under oath at the Election Tribunal being the only witness called by the PDP and Governor Fayose.

“If after giving evidence under oath at the tribunal that the Election was free, fair and credible and that security agents, including soldiers performed their duties creditably well, saying something else more than one year after is an admittance by Aluko himself that he is not a stable character.

“It is also a demonstration of the fact that giving the right offer tomorrow, the same Aluko can also address the press tomorrow to deny all what he said today. He can even deny his own existence since he can deny what he said under oath just because he was not made Chief of Staff.

“Therefore, we won’t bother ourselves, responding to what a political parasite chooses to say because he wouldn’t have said what he is now saying today if he had been made Chief of Staff to Governor Fayose and it is sure that if he called today, and given the right offer, he will begin to sing another song.

“Also, the APC bad losers in Ekiti State should know that it will take more than recruiting and paying a disgruntled TKO Aluko to discredit an election adjudged by both local and international observers, including the United States government as free, fair and credible. They will probably need to pay INEC to tell Nigerians that an election it conducted, in which an incumbent governor lost in his own local government was not credible.

“As per his claim that $37 million was given to the governor for the election, the governor got financial support from various sources as it is usual of anyone contesting election and it is not for to begin to advertise in the media the level of support the governor received from individuals, corporate organizations or groups. However, if money belonging to the APC is missing and they suspect that the money was stolen by Dr Goodluck Jonathan to fund Ekiti State governorship election, they can approach the EFCC.”