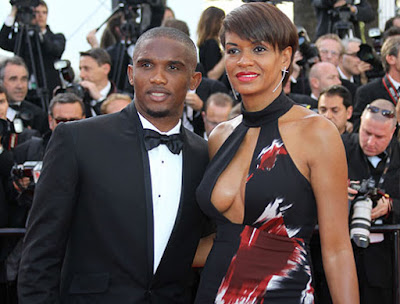 The book, which was due to go on sale today, claims the affair took place between 2007 and 2014, when Eto’o was at the height of his career with Chelsea, Barcelona, Real Madrid and Inter Milan. But lawyers for the former Cameroon international argued successfully that the book contravened France’s strict privacy laws.Judges banned the book on Thursday, although lawyers for the publishers have now lodged an appeal.Olivier Pardo, for the Paris-based ‘Editions du Moment’, told French news agency AFP: “I’m extremely shocked and flabbergasted by this ‘totally unjustified’ decision.”Mr Pardo added: “The book not only lays bare the life of Mr. Eto’o but also that of Nathalie Koah.”Ms Koah, who is from Cameroon, insists Eto’o published the intimate photos of her on the Internet as revenge when they broke up.She said:

“I won’t let myself be knocked down. I’m a victim in this story. I’m not being allowed to tell the truth as it is.”

In turn, Eto’o has accused her of ‘fraud and breach of trust’.Eto’o, who is now playing for Turkish club Antalyaspor, married his childhood sweetheart Georgette in 2007, and the couple now have four children.Source: UK Mirror