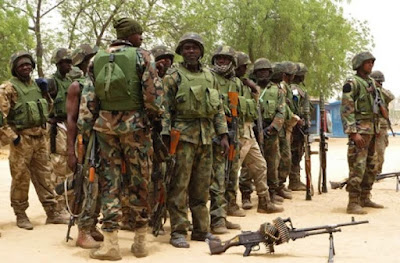 International Human Rights group, Amnesty International has criticized the reinstatement of a former commander of the 7 Division of the Nigerian Army, Major General Ahmadu Mohammed, who they accused of collaborating with other top officers in the Nigerian military to commit war crimes against people in the North East.In a statement released in June 2015 (read here), accused Major General Mohammed and eight other senior commanders of killing more than 8,000 people who they arrested over insurgency related offences.
Amnesty said Mohammed was in charge of 7 Division of the army when the military allegedly executed more than 640 detainees after Boko Haram Islamists attacked the detention centre in Giwa barracks, Maiduguri, capital of the restive northeastern state of Borno on March 14th 2014.In a statement signed by Salil Shetty, Amnesty’s secretary general, today February 1st, the group said Mohammed was retired in 2014 for unrelated reasons but was surprisingly reinstatement on January 17th

“Major General Mohammed must be investigated for participating in, sanctioning or failing to prevent the deaths of hundreds of people. Young men and boys, rounded up by the military, were either shot, starved, suffocated or tortured to death and no one has yet been held to account. It is unthinkable that Major General Mohammed could resume command of troops before an investigation has even begun. Seven months after the publication of these horrific discoveries and the (Nigerian) President’s pledge that they will be looked into, we continue to call for urgent independent investigations to begin,