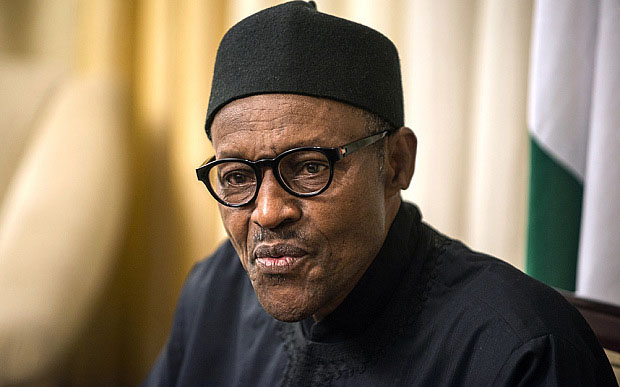 •President Buhari
An embarrassed President Muhammadu Buhari has ordered a  probe of  the alleged massive padding of the 2016 Budget proposals  by yet to be identified officials, Premium Times reported yesterday.
National Assembly members first blew the whistle on the strange figures and consequently suspended deliberation on the budget  until further notice.
Many Nigerians have expressed concern over the smuggling  of  unauthorised figures into the budget proposals.
The president is said to have directed that all identified   discrepancies, errors and ambiguities be expunged  immediately.
Officials of the  Ministries of Finance and Budget/National Planning  are expected to effect the necessary corrections.
A Presidency official blamed most of the errors in the budget on “over-ambitious civil servants” in the budget office who handled the preparation of the document prior to the appointment of ministers.
He said that by the time the ministers were eventually appointed, they had no sufficient time to properly scrutinize the budget for errors, in view of the tight deadline each of the ministries got before the final presentation to the joint session of the National Assembly on December 22, 2015.
Premium Times quoted a Presidency official as saying  that the probe will cover “all the allegations and issues, particularly on padding, raised by the National Assembly on various ministries, departments and agencies of government.”
The  panel,according to him, will also “critically look into the budget item-by-item, incident-by-incident, with particular attention to the reactions from the National Assembly, ministries, media, civil society groups or indeed anybody that raised concerns regarding the padding of the budget.
“All corrections would be made to ensure that the budget is passed as soon as possible. I assure you government is working cautiously on the corrections with the intention of correcting any error or malfeasance spotted in the 2016 Appropriation Bill. If there is any error whatsoever, it is being sorted out straight away.”
Budget Minister  Uda Udo Udoma was at the Presidential Villa yesterday apparently in connection with the Budget issue.
He claimed ignorance of any probe of the budget padding  by the Presidency.
But speaking  during the signing of an agreement with the Japanese Ambassador to Nigeria Mr. Sadanobu Kusaoke for an $11 million ‘Project for Emergency Improvement of Electricity Supply Facilities in Abuja’ on Thursday, Senator Udoma  said: “Let me just say that it is normal in a budget process – proposals are presented, sometimes issues are found and they are sorted out; so, it’s fairly routine.
“It shouldn’t be overplayed; these are routine things which are resolved as they come up and so, it is not an issue.
“Besides, we are discussing amicably with the National Assembly,” Udoma stated while responding to a reporter’s question.
Senior Special Assistant to the President on Media, Mallam Garba Shehu, declined yesterday to comment on the probe of the fraudulent padding of the