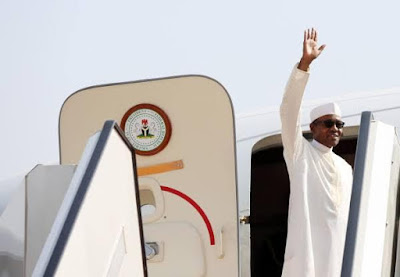 President Buhari will on Tuesday, February 2 begin an official visit to France and Britain, a statement released by his Special Adviser on Media and Publicity, Femi Adesina reads.

At his first stop in Strasbourg, France, President Buhari will on Wednesday, February 3, address a special session of the European Union Parliament to be attended by members of the executive and legislative arms of the Union.
The President’s address is expected to focus on terrorism, violent extremism, corruption, Nigeria and Africa’s current security, economic and developmental challenges, as well as the need for greater support from the European Union and advanced nations for their rapid resolution.
President Buhari will also hold talks with the President of the European Parliament, Mr. Martin Schulz and the President of the European Commission, Mr. Jean-Claude Juncker on the same issues before leaving Strasbourg for London to join other world leaders at the Supporting Syria and The Region Conference scheduled to open in the British capital on Thursday, February 4, 2016.
The President will use the opportunity of his participation in the conference which is being co-hosted by Britain, Germany, Norway, Kuwait and the United Nations to continue his push for more global understanding, collaboration and support for Nigeria and other countries in the frontlines of the war against terrorism who are striving to overcome its very adverse effects on affected populations.
He is due back in Nigeria at the weekend.