Presidency::President Buhari’s foreign trips not a jamboree but for the good of the country 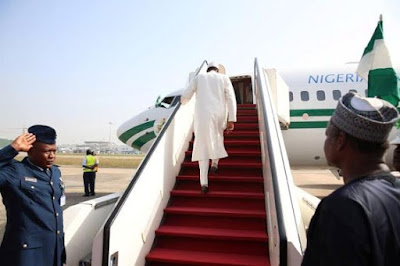 The Senior Special Assistant to the President on media and publicity, Mallam Garba Shehu has dismissed the insinuations that the President Buhari’s numerous foreign trips were a jamboree.
President Buhari has so far travelled to over 20 countries since his inauguration and is set to embark on an official visit to France and Britain later today.
Garba, who spoke to State House correspondents in Abuja on Monday stated that the Buhari’s trips had enabled his government to secure agreements and understanding with various countries on recovery and repatriation of stolen funds.
He revealed that security officials from Nigeria would be in United Arab Emirates, UAE, next week to finalize the agreement on recovery and repatriation of stolen funds.

“You also see gradually the strategic efforts to go after the stolen funds abroad. The UAE is very important to the country. Don’t be surprised that in the coming week or two, you will see high level security officials leaving Nigeria for the UAE to begin to give expression to our wish to enjoy this new cooperation between the two countries with a view to recovering stolen assets. There are numerous agreements we have also signed with them. Drugs, human trafficking and stolen assets that have been stolen abroad. So, the President wants to make it difficult for people, even when then steal from Nigeria, there would probably be no hiding place for stolen assets”