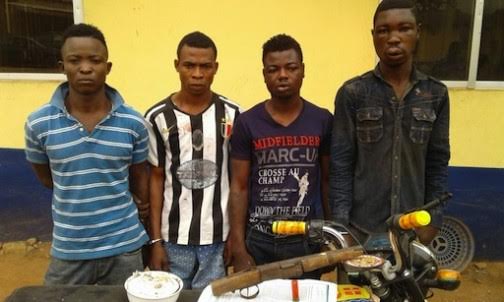 Four suspected armed robbers were arrested by the Ogun State Police Command along Ode Lemo Road, Sagamu, Ogun State.
The suspects identified as David Ogunjinrin, and Mohammed Ibrahim were arrested by police detectives attached to Sagamu Divison led by the Divisional Police Officer after they received a distress call about an ongoing robbery.
When the police arrived the crime scene, the robbers had already attacked their victim and dispossesed him of his motorcycle, mobile phones and money. The two suspects led the police to their hideout in Onoajegbe Village in Iperu Ogun state where two other members of the gang identified Adebayo Segun and Muda Yahaya were arrested. Among items recovered from them were a Bajal Motorcycle and a locally made single barrel gun.
PM News reports that the suspected armed robbers who confessed to have carried out numerous crimes in Lagos and Ogun state claimed to be from Lagos State.
The Deputy Commissioner of Police in charge of Department of Finance and Administration, DCP Celestine Okoye, who spoke on behalf of the Commissioner of Police Ogun State CP Abdulmajid Ali commended the Divisional Police officer and his men for the good job and directed that the case be transferred to the Special-Anti Robbery Squad Abeokuta for further Investigation.