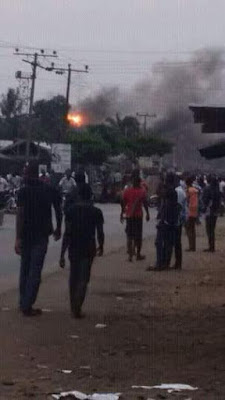 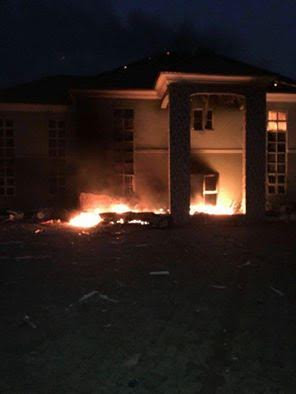 The senatorial liaison office of the candidate of APC in the March 19th re-run election in Rivers South East Senatorial District, Senator Magnus Ngei Abe was attacked in Bori, Ogoni on Monday February 22.
A statement by Parry Saroh Benson, Spokesperson to Senator Magnus Ngei Abe said, armed men clad in army uniform suspected to be thugs of the Peoples Democratic Party (PDP) in Rivers State is alleged to have been responsible for the dastardly act.

Eye witness account said that the criminals carrying sophisticated weapons threw dynamites and bombs into the senatorial office of Senator Magnus Abe in Bori while staff and visitors as at the time of incident scampered for safety.

Meanwhile some staff and visitors who escaped are yet to be accounted for.
Recalled that few days ago, Governor Nyesom Wike had at the 50th Birthday celebration of Senator Lee Maeba in Luuwa, Khana Local Government Area in Rivers State charged PDP supporters that he will not be happy unless they stop Senator Magnus Abe’s re-election bid by all means.
The event of today has clearly shown that the charge by the Governor to his supporters to stop Senator Abe has just begun by the attack on the senatorial liaison office.
“We view this attack as a cheap attempt to intimidate our supporters and so fear to participate in the forthcoming re-run election”.
“I want to call on all our supporters and all law abiding citizens of the Rivers South-East Senatorial District especially the people of Ogoni not to take laws in their hands nor do anything that will lead to lost of lives and property but to remain resolute and ready to participate fully in the forthcoming re-run election in the area”. Abe said.
He went further to say, “the struggle to liberate Ogoniland, Rivers State and particularly Rivers South East Senatorial District from the claws of political gangsters, criminals and thugs masquerading as political leaders cannot be won without sacrifice”.
Abe added that the reign of impunity, violence and lawlessness has reached its zenith in Rivers State and “we cannot pretend that any kind of election could be held under this atmosphere unless something is done to bring to book the perpetrators of this heinous crime as March, 2016 may not be different from March, 2015″.
The statement concludes by saying “we do not need to wait until the Omoku experience repeat itself in Bori where over 20 persons were killed in one day. Therefore, I called on President Muhammadu Buhari, the Police and other security agents in the State to act fast in order to forestall further attacks by criminal gangs on the people”