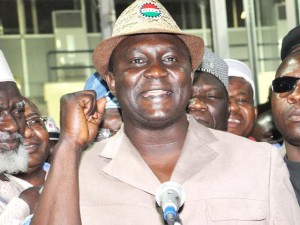 The Nigeria Labour Congress, Trade Union Congress, and civil society allies say they will hold a protest on Monday against the 45 per cent increase in electricity tariffs announced by the Nigeria Electricity Regulatory Commission.
The protest will hold Monday, February 8, in Abuja and across the nation, the labour groups announced in a statement Thursday.
“It is a nation-wide protest, meaning that the 36 states of the Federation including Abuja will be involved in this action,” the statement signed by Ayuba Wabba, the NLC president, said.
“Our members have been sufficiently mobilized and are ready to go. If you are an electricity consumer and you are not happy with the bills electricity companies serve you every month, you are invited to join this protest rally.”

He said the Abuja rally will start at Labour House, Central Business District at 8.00am before moving to the NERC head office at Adamawa Plaza, Plot 1099, First Avenue, Off Shehu Shagari Way, Central Business District. From the NERC office, the rally will roll to the Abuja Electricity Distribution Company at Zone 4. The rally will mobilise from there to the National Assembly.
The labour groups said the protest rally became necessary after all effort to make NERC shelve the idea of increase failed.
“Indeed, rather than see reason with Nigerians, the Minister of Power, Works and Housing has been advancing spurious argument in justification.”
Part of the statement reads:
The reasons for this protest are obvious and include the following:
· The due process in the extant laws for such increment was not followed in consonance with section 76 of the Power Sector Reform Act, 2005;
· There has been no significant improvement in service delivery. Moreover, the fact is that most consumers are not metered in accordance with the signed privatization Memorandum of Understanding (MOU) of November 1, 2013, which stipulates that within 18 months gestation period, all consumers are to be metered;
· There is a subsisting Court Order dated 28th May, 2015 by Justice Mohammed Idris of the Federal High Court, Ikoyi, Lagos, in the case of Toluwani Yemi-Adebiyi versus NERC & Orders, that there shall be no further increment until the determination of the substantive suit.
· The increment at this time negates the present biting and prevailing economic recession vis-a-vis an attempt to further impoverish the poor masses.
We stakeholders, on Increment in Electricity Tariff (a broad coalition) met in Lagos on January 28, 2016 and issued a communiqué demanding an “immediate halt of this morbid and exploitative intention” failure of which would lead to:
· Mobilization of all Nigerians to resist the new tariff;
· Mass protests/picketing of all DISCOs’ offices across the country;
· Directing all consumers to reject any bill with the new tariff and other actions necessary.
Earlier, Nigerians had spontaneously moved to the streets in Lagos, Benin, Kano and other cities when NERC announced this increase in the last quarter of 2015.
At the level of the Congress, we had issued a communiqué on December 22, 2015 rejecting this tariff hike and demanding that pre-paid metres be made available free to all consumers.
We noted that Distribution Companies “have continued to exploit Nigerians by estimated billing system for the majority of consumers, while deliberately refusing to make available prepaid metres.
We also said the challenges in the economy which have adversely reduced the purchasing power of ordinary Nigerians and slowed down businesses including manufacturing have made this increase unsustainable and unjustifiable.
We reached out to core government constituencies including the Minister of Power, the leadership of the National Assembly and NERC, all in an effort to find an amicable resolution through the quality of the logic of argument and practical realities on ground which include the incontrovertible fact that even before this increment, Nigeria paid the highest tariff per kilo-watt in Africa and contiguous regions. We pay much higher than Egypt and countries with stronger economies.
With the increment, this disparity will not only be substantial, it will kill Nigerians and businesses. The saddest part of it all is that there is no co-relation between the quality of service delivery and this tariff.
The implementation of this tariff is an act of lawlessness because there is a subsisting restraining court order on further increases. And yet we are in a democracy.
The point must also be made that the immediate past government in its twilight approved a whoppingN18.26 billion for these companies in order to boost electricity supply. Yet there is nothing to show for it. A privatised sector that continues to parasite on government with insignificant benefit to Nigerians is at best a leech on our economy and should be interrogated.
We would want to make the point that this tariff increase is only intended to protect the investment of a select few and not to serve the interest of other Nigerians. In light of all of the above, this increase is illegal, unfair, unjustifiable and a further exploitation of the already exploited Nigerians.