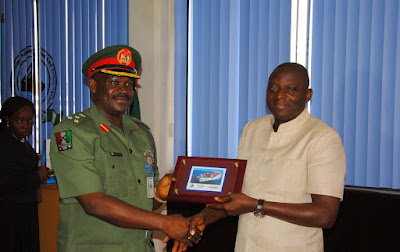 A businessman, Uche Obilor, narrated to a Federal High Court in Lagos on Tuesday how he got a N905.8m contract from the Nigerian Maritime Administration and Safety Agency without bidding for it.

He, however, said that ever before the contract could be executed the agency cancelled it and instructed that the money should be transferred to personal accounts of some individuals and companies.

Obilor testified on Tuesday against the immediate past Director-General of NIMASA, Patrick Akpobolokemi, and five others, who are being prosecuted by the Economic and Financial Crimes Commission for allegedly stealing and diverting N2.6bn belonging to NIMASA.


The accused were said to have allegedly perpetrated the scam between December 23, 2013 and May 28, 2015. They were arraigned on 22 counts before Justice Buba on December 4, last year.

The anti-graft agency claimed that the accused violated Section 8 (a) of the Advanced Fee Fraud and Other Fraud Related Offences Act, 2006 and were liable to punishment under Section 1 (3) of the Act.

They were also accused of violating Section 18 (a) of the Money Laundering (Prohibition) (Amendment) Act 2012 and liable to punishment under Section 15 (3) of the same Act.

But the accused had all pleaded not guilty.

Obilor was the fourth witness to be called by the EFCC to prove its allegations.

Led in evidence by the EFCC prosecutor, Rotimi Oyedepo, Obilor told Justice Buba how his companies were approached by NIMASA to execute a contract involving the implementation of   International Ship and Port Facility Security for the maritime agency.

He claimed that sums of N437m, N402m and N66,800,000 were paid into the bank accounts of Seabulk Offshore Limited, Southern Offshore Limited and Ace Prosthesis Limited respectively for the contract.

He, however, said that shortly after the companies were issued the letter of award and were preparing to commence executing the contract, they received an instruction from the 2nd defendant, Agaba, who was an Executive Director with NIMASA, asking them to stay action on the contract.

He added that Agaba subsequently instructed them to transfer the money to certain individuals and companies.

Obilor, who stressed that his companies did not bid for the contract, also disowned all documents allegedly issued by his companies requesting for payment and the invoices issued in the name of the companies to NIMASA.

“My Lord, the purported invoices did not emanate from our office,” Obilor said.

Under cross-examination by Akpobolokemi’s lawyer, Dr. Joseph Nwobike (SAN), the witness told the court that the N437m paid into the bank account of Seabulk Offshore Limited was transferred down to N54m on Agaba’s instruction.

He denied that the N54m was a profit made by his company from the deal. He claimed the money was retained to cover the tax implication of the company, adding that it had since been confiscated by the Federal Government.

Asked whether he met or communicated with Akpobolokemi through the entire deal, Obilor answered in the negative.

Under cross-examination by Agaba’s lawyer, E.D. Onyeke, Obilor denied that the payment request documents and the invoices which he earlier disowned were signed by the Executive Director and the General Manager of Seabulk Limited, Pele Nduku and Philip Okolo respectively.

“I am unaware that they signed these documents,” Obilor said.

Justice Buba adjourned till February 5 for continuation of trial.