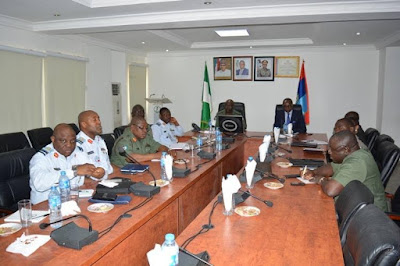 The Ministry of Petroleum Resources and the Defence Headquarters are perfecting the synergy between the two organisations towards curbing the menace of crude oil theft & pipelines vandalism.Minister of State for Petroleum Resources, Dr Ibe Kachikwu was in Defence Headquarters today, February 2, where he was briefed by the high powered Committee set up to work out actionable modality for protection of oil and gas pipelines across the country. 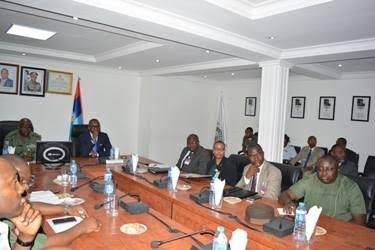 It would be recalled that issue of oil theft and pipelines vandalism was extensively discussed few months ago when Dr Kachikwu, then the Group Managing Director (GMD) of the NNPC, visited the DHQ. The aftermath of that visit was the setting up of a Committee to provide guidelines for the protection of oil and gas pipelines by the Chief of Defence Staff (CDS), General Gabriel Olonisakin. 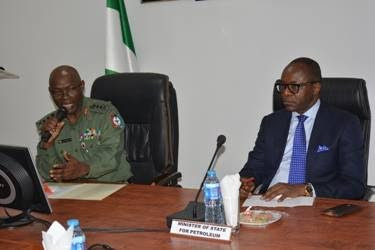 The Committee, which was headed by Rear Admiral Joseph Okojie, was composed of the Military, Police, Civil Defence, Department of State Service, NNPC, EFCC, NPA, Department of Petroleum Resources, NIMASA and other relevant stakeholders. During interaction on the Report, both the Honourable Minister and the CDS agreed that involvement of host communities was very paramount in the success of any action to be taken.The military, the CDS agreed, would play major role in quick response while acquisition of new technology would be also vital for the holistic intervention in the emerging modality for the oil and gas pipelines protection.The CDS further reiterated the Military’s commitment to securing the National Critical Infrastructure, and warned that any act of criminality such as pipelines vandalism and other sabotage would not be condoned and added that such groups or individuals engaging in such criminality would be dealt with according to the