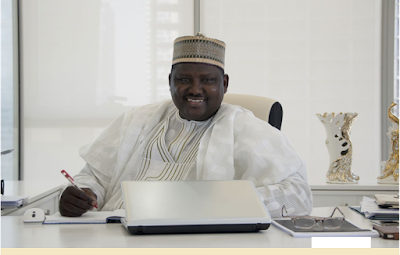 The International Police Organisation, the INTERPOL, has issued a red alert on the former Chairman of the Pension Reform Task Team, Mr. Abdulrasheed Maina.
A top operative of the commission, who confided in our correspondent on Monday, said that the INTERPOL decided to place the red alert on Maina, in response to a request from the Economic and Financial Crimes Commission.
According to the source, the international police, in its response to the EFCC’s request, referred to Maina as “a wanted fugitive.”

The source said that the EFCC had written to the Inspector-General of Police to request his assistance to get the INTERPOL to issue a world-wide alert on Maina on November 18, 2015.
The commission had charged Maina to the Federal High Court on July 10, 2015 with charge number FHC/ABJ/297/2015.It was stated that the police authorities in a response to the EFCC’s request through the Commissioner of Police in charge of INTERPOL, Mr. Olusola Subair, stated that the request had been processed and all the demands met.
Subair was said to have informed the Acting Chairman of the EFCC, Mr. Ibrahim Magu, that the INTERPOL had placed a red alert on Maina at its general secretariat in Lyon, France
“Be informed that the Bureau has taken necessary action on the wanted fugitive as requested with INTERPOL General Secretariat, Lyon, France.“He has been published on the INTERPOL Red Notice accordingly,” Subair was quoted to have said.
The source said that Maina who is being prosecuted for an alleged embezzlement of N2bn pension funds at the Office of the Head of Service of the Federation, would not be able to hide anywhere in the world.
The source added that the leadership of the EFCC was of the view that Maina might be hiding at the United Arab Emirates.Prior to this, the commission had obtained a court warrant to declare Maina wanted.
Our correspondent could not get the Head of Media and Publicity of the EFCC, Mr. Wilson Uwujaren, to comment on the story as the calls to his mobile telephone did not connect.
The EFCC had on November 2 last year declared Maina wanted over an alleged N2bn pension fraud.
The commission, had in a statement by its spokesperson, Uwujaren, implored anyone with information on Maina’s whereabouts to contact any of its offices across Nigeria.
Maina was on July 21, 2015 charged alongside three others before a Federal High Court on a 24-count bordering on procurement fraud and obtaining money under false pretences.
While the three others were in court and pleaded not guilty to the charge, Maina had been at large.
On July 21 when the court heard the bail applications of the three, Maina through his counsel, Esther Uzoma, said that the former chairman of the PRTT was not at large, claiming that the EFCC had never invited him.
The EFCC counsel, Rotimi Jacobs, SAN, had urged with the court to prevail on counsel for the accused person to produce Maina in court, adding that the commission did not know his whereabouts.
Although the court granted Jacobs’ prayers, Maina continued to shun court proceedings, leaving the commission with no option but to declare him wanted.
Uwujaren had said that since the commission filed charges against Maina, more damning evidences had emerged on how the former PRTT boss siphoned pension funds using secret accounts in a new generation bank in Abuja
Advertisements