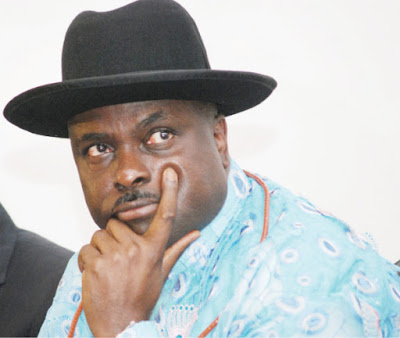 The Chief James Onanefe Ibori Media Office hereby informs Ibori’s teaming supporters that the news about the release of their champion and political leader from prison is not true. This news had set off a frenzy of activities in the entire South-South geo-political zone, as many people took off from their respective towns and villages to storm Ibori’s home town of Oghara. Many kept vigil at his gate; but the vigil was in vain as Ibori has not finished serving his term.

In a press statement of Thursday February 4, Tony Eluemunor, Ibori’s Media Assistant, said: “Perhaps, as the magnitude of the lie The News on-line publication told to itself and the nation (in a story it had termed an exclusive) dawned on it, its sister publication, PM News kicked in with another lie; that Ibori had been re-arrested. This caused a sleepless night to another set of Ibori’s supporters as they stayed up all night working the phone to find out the true situation”.
The truth is that the exclusive stories published by The News  and PM news were exclusive lies. Over 24 hours after the publications, no British authority has confirmed either the news of the release or of the purported re-arrest.
Eluemunor, added: “many people have asked me how such a malicious story could have been cocked up. My only reply is that Ibori’s political and legal persecutors tried to counter the favourable wind that arose from Ibori’s corner when the case turned against the London Metropolitan Police and the Crown Prosecutors by late January 2016, when even they agreed that they were corrupt in the way they investigated Ibori and his associates. That forced them to withdraw the obstructing the cause of justice charges they had brought against one of Ibori’s  lawyer, Mr. BradeshGohil. Most importantly, the Judge that day ruled that all the documents that had been withheld from Ibori and all his associates should be turned over to them and that they were free to go on appeal to challenge even their earlier convictions. It was this ray of hope that even Ibori’s conviction may be struck down that the media manipulators attempted to extinguish in the hearts and minds of Ibori’s supporters when they concocted their lies and passed same off as news.
To prove that the case has turned and the hunters may be feeling the heat, respected British news media such as the British Broadcasting Corporation (BBC), The Times of London and the Guardian of London, last week announced that calls have arisen that Ibori’s and his associates’ accusations of corruption against the prosecution be investigated. The New Indian Express of Monday 25 January 2016 reported that “In representations to the judge, Stephen Kamlish, Gohil’sdefence team accused the Crown Prosecution Service of “positively misleading the court and the parties as part of their deliberate cover-up of discloseable material”.
In response, the Judge Tester said, “The crown has offered no evidence for one or both of the following reasons. One, that the allegations of corruption made by MrGohil are true, and not false. The second is that the crown has suppressed material both in this court and in other proceedings, including the trial of Ibori.
“The crown offering no evidence can only mean the crown is not prepared themselves to explain their decision, either for the abuse of the court in bad faith or for the police corruption. In those circumstance, it is our duty to our client to raise these matters and this brings into question the safety of these convictions.”
The Indian Express continued: “A Met police intelligence report seen by this paper (The Indian Express) suggests an RISC employee telephoned a police officer working on the Ibori investigation in 2007 and allegedly told him his inquiries were “on the right track”. Separate documents shown to Gohil’sdefence team are said to reveal the existence of 19 cash deposits into the same officer’s bank account. The CPS had allegedly denied the existence of the documents”.
Eluemunor added:  “In a press statement of Thursday January 28, 2016, I wrote:  ‘It is an incontrovertible fact that the confiscation hearing has not started at all, and remains months away into the future”’. Even today, that remains the case as nothing has changed. The confiscation hearing has not started and nobody, whether Ibori or another, has been arrested as there is really no need to arrest anyone because of a confiscation hearing.
Advertisements