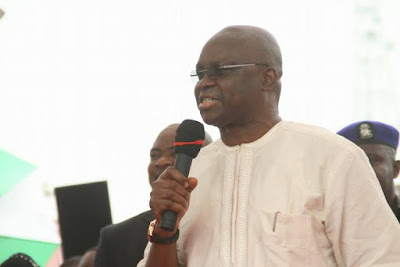 Ekiti state governor, Ayo Fayose has accused President Buhari of planning to Islamize Nigeria. According to Vanguard, Fayose made the allegation during the PDP Rivers state thanksgiving service for the state governor, Nyesom Wike, whose election was upheld by the Supreme court on January 27th. Fayose reportedly told the gathering he had a secret to reveal about the present administration. When asked to share the secret, Fayose said;

“They have started subtle moves to make Nigeria an Islamic nation, but God will stop them. This was done in 1984, it failed, it would fail again.”he said He added that he was not afraid of anyone and that his name is Peter whcih means Th Rock. “I am not far away, I am in Ekiti. I am Ayo Fayose, Peter the rock, if you hit me you will be in trouble. If I hit you, you will be in trouble.”. To substantiate his allegation about Buhari’s plan to Islamize Nigeria, Fayose said: “Why did five of them go to Saudi Arabia to wait for our man there (referring to President Buhari and state governors), if they don’t have agenda. The agenda is coming small small, but we will resist it. Nigeria is a free nation where we proclaim the name of Jesus Christ freely, and we believe in Allah for those who are muslims. This nation will not be taken for an Islamic nation,” he declared