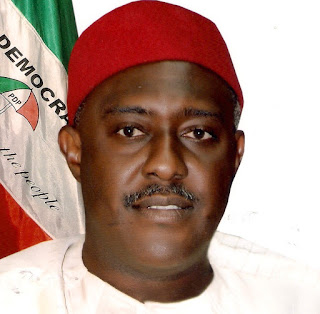 He said the spokesman of the Peoples Democratic Party (PDP), Olisa Metuh, gave him the money for the party’s media publicity activities.
Dabo, who was Sambo’s Political Adviser, said this yesterday while testifying at a Federal High Court, Abuja, at Metuh’s trial.

Metuh is being tried with his company, Destra Investments Limited, on a-seven count of   allegedly receiving N400 million from the Office of the National Security Adviser (ONSA) on November 22, 2014, and laundering $2 million.
Dabo, led in evidence by prosecution lawyer, Sylvanus Tahir, said the N25 million was paid to him through an account belonging to Metuh’s firm – Destra Investment Limited – on December 16, 2014, five days after former President Goodluck Jonathan and Sambo were selected as the party’s candidates.
The witness, who said he was an editor and one-time chief press secretary to former President Shehu Shagari, said he eturned the money to the EFCC because he could not reach Metuh, who had then been arrested by the commission.
Dabo, a chieftain of the PDP said: “Unfortunately, there were reports in the media, on this transaction with Chief Metuh linking it to controversial circumstances. I mean it was identified that Chief Metuh paid the N25 million into my account through his company and that the source of the money was from the arms deal that was being discussed.
“As a result of that publication, we thought we needed to explain, and because it was paid to my personal account, I decided to make a refund, and  I paid it to EFCC, because I couldn’t reach Mr. Metuh.
“The newspapers were awash with the story that linked the money given to me to the arms money that was said to have been diverted to other uses by the Office of the National Security Adviser. On my own, I decided that the best way out of the rigmarole was to pay back the amount. I paid it to EFCC.”
Dabo said he was paid the N25 million by Metuh before  the 2015 presidential election, to help the party “mitigate and counter negative media reports against the Jonathan-led government and the PDP.”
The witness added that he also set up a team of facilitators and young Information Technology enthusiasts, who were active on the  Internet to run a website, ‘What’s Up Naija’.
“From the money we received from Chief Metuh, we paid salaries and allowances of facilitators, bought equipment and computers for the young people working on ‘What’s Up Naija’.
“We paid that year’s rent for our office at 12B Deb Street, Off Danube Street in Maitama, Abuja. We also used that office to monitor the election