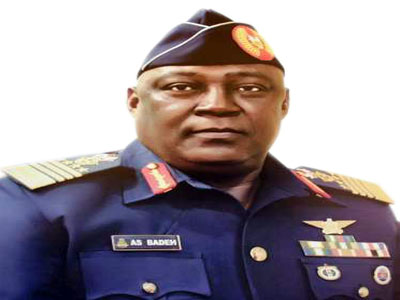 The Economic and Financial Crimes Commission (EFCC) yesterday searched the house of a former Chief of Defence Staff, Air Chief Marshal Alex Badeh.
The former CDS is still in custody, being grilled.
There were indications that some serving military officers have been moved to guest houses, pending their interrogation.
According to a  source, some operatives were drafted to Badeh’s house to retrieve some documents.
The source said: “After interacting with the ex-CDS for 24 hours,  it became important to search his residence for some vital documents. We acted on intelligence report at our disposal.
“After the search, we made necessary documentation of the items retrieved from the place. Such a search is routine when conducting a sensitive investigation like this.
“Badeh underwent another round of grilling  yesterday bordering on the procurement of used aircraft.
“The ex-CDS may spend longer days in EFCC custody because of the wider scope of the procurement deals in the Armed Forces.
“He is expected to account for purchase of uniforms for the Armed Forces when some officers and men complained of not getting the required pairs. “On November 26, 2014, the immediate past Chief of Defence Staff, Air Chief Marshal Alex Badeh sought for approval of the award of one pair of uniform(in the interim) for the Armed Forces at N165, 375 to El-Jahab Mubarak Nigeria and N330,750,000 for two pairs’’.
Some serving military officers have been relocated to some Armed Forces guest houses pending their interrogation by the EFCC.
Another source added: “In grilling these officers, we are trying to keep to military tradition of according them the respect befitting of officers.
“You know all suspects are presumed innocent until proven guilty. Some of these officers are currently in some military guest houses.”
Besides Badeh, others being interrogated are a former Chief of Air Staff, A.N. Amosu; ex- Chief of Air Staff, Air Marshal M.D. Umar;  ex-National Security Adviser, Col. Sambo Dasuki ; Col. N. Ashinze , who was the Special Military Assistant to the ex-NSA; and the most senior Air Force officer, and AVM A. M. Mamu(the Chief of Administration).
Others are  AVM O.T. Oguntoyinbo (former Director of Production, Defence Headquarters);  AVM R.A. Ojuawo (Air Officer Tactical Air Command, Makurdi;  AVM J.B. Adigun(former Chief of Accounts and Budgeting in NAF); and AVM JA Kayode-Beckley(Director, Armament Research in Air Force Research and Development Centre); AVM T Omenyi (MD, NAF Holdings)four top officers at the Defence Headquarters (DHQ), Air Cdre AO Ogunjobi; Air Cdre GMD Gwani; Air Cdre SO Makinde; and Air Cdre AY Lassa Some of the areas of investigation are as follows:
Advertisements