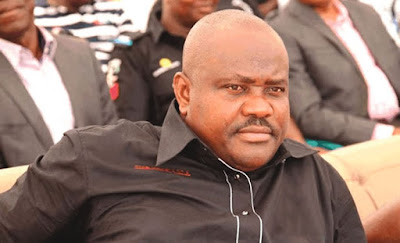 Rivers State Governor, Nyesom Ezenwo Wike on Valentine Day lifted the suspension  of the State Finance Commissioner, Dr Magnus Kpakol and the State Accountant-General,  Sir Abere Dagogo.
Addressing Rivers State public servants and political  leaders during  a Special Valentine Couples Night  organised by his wife, Justice  Eberechi Suzzette Nyesom-Wike at the Government House, Port Harcourt, Governor Wike  said  the suspension  was lifted in deference  to the interventions  by different  political  leaders and as a show of love during  the  valentine.
Governor Wike  charged  political appointees to differentiate between friendship and governance  in the discharge  of their respective  functions.
He said:

“Governance  is a serious  business. It is not friendship.  When it comes to governance I won’t know friendship.

“I will lift the suspension on the Finance Commissioner and the Accountant-General, but they must henceforth  take  their functions  seriously.  Next time, I will not take into consideration  the please of political  stakeholders”.

He advised all political  appointees to take their responsibilities  seriously  as his administration  must succeed in the delivery  of  projects contained  in his development  blueprint.