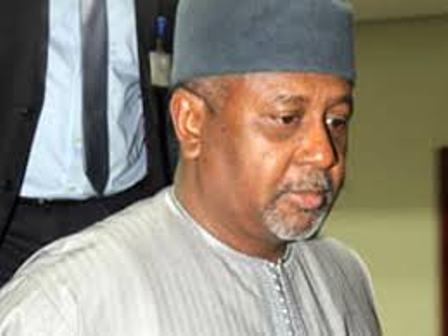 Dasuki
Former National Security Adviser, Col. Sambo Dasuki (rtd), immediate past Chief of Defence Staff, Air Chief Marshal Alex Badeh, former Chief of Air staff, Air Marshal Adeshola  Amosu,  and some retired military chiefs  who are currently being interrogated for alleged corruption are likely to face separate charges, according to indications last night.
They are all in the custody of the Economic and Financial Crimes Commission (EFCC) whose lawyers are said to be working round the clock compiling charges to be preferred against them in court.
It was gathered that the commission is still gathering information on the beneficiaries of the N10billion oil signature bonus cash allegedly made available by Dasuki ahead of the PDP National Convention where ex-President Goodluck Jonathan was the party’s sole presidential aspirant in 2014.
The EFCC wants Jonathan’s ex-ADC, Colonel Ojogbane Adegbe, who is also in detention to provide the list of all the beneficiaries.
Adegbe allegedly shared the money along with a former aide to Jonathan, Waripamowei Dudafa.
Dudafa is believed to be outside the country.
Sources said that once the EFCC gets the list, it will demand full repayment of what each delegate collected.
A well placed source said:  “From the revelations at our disposal on the ongoing probe of former and serving military chiefs, we may have to opt for separate trials for ex-Chief of Defence Staff, Air Chief Marshal Alex Badeh, former Chief of Air Staff, Air Marshal Adeshola Amosu, and others.
“They will be arraigned with the ex-NSA Sambo Dasuki based on gross abuse of the procurement process in the military.
“We are already at a crucial stage of the probe with the invitation of some serving and retired military chiefs.
“So far, we are investigating 29 serving and retired military officers and more than 22 companies implicated in the arms deals.
“As we are establishing facts and gathering evidence, we are compiling charges against some of these suspects. We actually work round the clock. All those invited are in safe custody, we will soon prefer charges against them.”
Asked how many times Dasuki will appear in court, the source added: “We have different issues being probed and we can’t ignore all these dimensions.”
The military chiefs (retired and serving) being questioned include  Badeh, Dasuki, two former Chiefs of Air Staff, Air Marshals M.D. Umar and A.N. Amosu (rtd).
Some of the affected serving officers are the most senior Air Force officer, AVM A. M. Mamu (the Chief of Administration); AVM O.T. Oguntoyinbo (former Director of Production, Defence Headquarters);  AVM R.A. Ojuawo (Air Officer Tactical Air Command, Makurdi;  AVM J.B. Adigun(former Chief of Accounts and Budgeting in NAF); and AVM JA Kayode-Beckley (Director, Armament Research in Air Force Research and Development Centre); AVM T Omenyi (MD, NAF Holdings)four top officers at the Defence Headquarters(DHQ), Air Cdre AO Ogunjobi; Air Cdre GMD Gwani; Air Cdre SO Makinde; Air Cdre AY Lassa and Col. N. Ashinze , who was the Special Military Assistant to the ex-National Security Adviser.
The Nigerian Army confirmed on Thursday that 12 of its officers had been sent to the EFCC for investigation.
The  Acting Director of Army Public Relations, Col. Sani Kukasheka Usman, said in a terse statement that the officers  “comprised three serving Major-Generals and one retired, three Brigadier-Generals, four colonels, and one Lieutenant Colonel.
“However, it should be noted that at the end of the commission’s investigations, those found culpable will be tried by a Military Court Martial.”
Investigation revealed last night that many PDP chieftains benefited from more than N10billion ($47m) withdrawn from the Office of the National Security Adviser (ONSA) for delegates to the special convention of the party to adopt ex-President Goodluck Jonathan for the 2015 presidential election.
Another top source in the anti-graft commission said: “The EFCC has grilled Jonathan’s ex-ADC and asked him to produce the list of beneficiaries of the N10billion (over $47m) withdrawn from an oil bloc account in the Central Bank of Nigeria (CBN).
“Although the former ADC claimed that he acted on the instructions of ex-President Goodluck Jonathan, we are only demanding the list of disbursement to PDP stalwarts. It is left to the ex-ADC to make the list available to the EFCC.
“We will then release the list to the public at the appropriate time. We will recover this over N10billion from the affected beneficiaries. The cash was from a Signature Bonus Account in CBN.
Advertisements