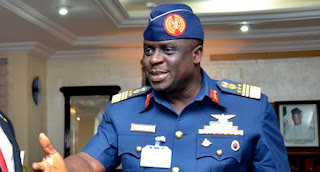 The Economic and Financial Crimes Commission has recovered N381m from Mrs. Omolara Amosu, the wife of the immediate past Chief of Air Staff, Air Marshal Adesola Amosu.
Sources within the EFCC said on Saturday that the money was recovered in three tranches: N180m, N101m and N100m.
The detective told our correspondent that the money was traced from the account of the Nigeria Air Force to the bank accounts of a company in which Amosu’s wife is a director.
He added that Amosu’s wife is a signatory to the accounts.
He said, “We recovered N381m from Amosu’s wife, Omolara. Initially, we recovered N180m from her account before another N101m and then N100m. These were monies transferred from Air Force accounts.”
Explaining how the money was diverted, the detective added, “They (Air Force officers) sent the money to an account where their wives have interests or are signatories without doing anything.”
A second source within the EFCC told our correspondent that more properties belonging to the immediate past Chief of Accounts and Budgeting of NAF, Air Vice Marshal J.B. Adigun, had been seized.
The detective said a property, which is a quarry located in Ogun State, had equipment worth about $600,000.
He, however, did not state the value of the property.
Two weeks ago, houses worth over N2bn in Ikoyi and Victoria Island allegedly belonging to Adigun were seized.
The source said, “Adigun is still here with us. We recovered a quarry which he owns. In the quarry there were pieces of equipment worth about $600,000. They have all been impounded and investigations are ongoing.”
Amosu, Adigun and over nine air force officers are currently under investigation by the anti-graft agency for the procurement of equipment which was said not to be transparent.
Since his detention, Amosu had been quizzed over the procurement of two second-hand Mi-24V Helicopters instead of the recommended Mi-35M series at a cost of $136.9m.
The helicopters were alleged not to be operationally airworthy at the time of delivery while a brand new unit of such helicopters costs about $30m.
Meanwhile, it was learnt that Amosu and some other officers would be charged to court as soon as the holding charge which the EFCC obtained in court to hold the officers for 30 days from January 28 lapses.
A detective said, “Amosu will be charged to court anytime from now. Recall that we obtained a holding charge from a court to hold him for a maximum of 30 days. We are rounding off our investigations and anytime from now, he will be charged to court.”
The PUNCH had exclusively reported on February 11 that the EFCC had seized houses and other properties belonging to the immediate past Chief of Air Staff and other senior military officers worth N5bn.
According to the report, the properties, which were seized in the Ikoyi, Ikeja GRA and Badagry areas of Lagos State, allegedly belonged to Amosu; the immediate past Chief of Accounts and Budgeting of the Nigerian Air Force, Air Vice Marshal J.B. Adigun; and Air Commodore O. O. Gbadebo, who was the Director of Finance and Budget at NAF.
A source, who spoke to The PUNCH had said, “We have sealed a block of 12 luxury flats, located on Agodogba Street, Park View Estate, Ikoyi, belonging to Adigun. It is worth over N1.7bn. The same Adigun also owns another block of luxury flats on Sinari Daranijo Street, Victoria Island, Lagos. It is worth N1.8bn.
“A parcel of land, located on Bourdillon Drive, Ikoyi, worth N908m, belonging to Adigun has also been seized by the EFCC operatives.”
The source added that six other properties had been traced to Adigun, including a set of four terrace houses on Agede Street, off Aminu Kano in the Wuse 2 area of Abuja.
He stated that the properties traced to Amosu were located in the Ikeja area of Lagos metropolis.
The operative said apart from the buildings, Amosu’s vehicles had also been confiscated by the anti-graft agency.
He added, “Amosu confessed to owning an ultra-modern hospital on Adeniyi Jones Avenue in Ikeja. The hospital, St Solomon Health Care Limited, which is worth about N85m, has been sealed off.
“A house located on Adeyemo Alakija Street, GRA Ikeja, near the Ghanaian High Commission, which belongs to Amosu has also been sealed. It is worth over N200m.”E
Advertisements