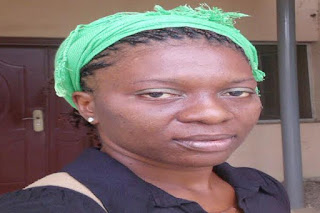 A primary school teacher identified as Evi Iwaha pictured above, has narrated how some robbers attacked her,took her ATM card and cleared her account in the early hours of Saturday January 30th.

She narrated her story to The Nation. “It happened a few minutes to 6.00am; I’d boarded a bus supposedly to Oshodi from Obanikoro. No sooner had the bus moved than they sprang into action. The first thing they did was grab my phone; ‘What do you do? Where are you coming from?’one of them asked. I was hopeful that they’d take pity on me, having told them I was just a primary school teacher.
Why bother to ask if it meant nothing to them? After rummaging through my wallet, they found two ATM cards and some cash. The question that followed hit me with a bang. ‘What’s your pin number?’ Instinctively, I hesitated for a while, but a resounding slap on my face soon got me spilling it out. These guys were actually going to do the unimaginable. They were going to clear my account. To think that I was about experiencing stories that had seemed far away. I looked up in time to see another member of the gang, sitting in the front seat. They called him officer. I don’t know if he was some military officer or if the name was just a code name. Even though I was still a little dazed from the slap, I couldn’t but notice the gun that hung loosely in the man’s hand, as he spoke to his colleague. He quickly handed the ATM cards to another member who played the role of a bus conductor. The driver slowed down at my inquisitor’s command, and the bus conductor jumped off the bus on his way to emptying my accounts. I silently wished I had payed the money into my friend’s account, he had asked me to do so to avoid spending it, since I’m saving towards paying my rent. Meanwhile, while we awaited the arrival of the messenger, the bus kept going round and round. In the process, the two women I met on the bus were told to disembark, and two others, a guy and his girlfriend were picked up at the next stop. They were lucky, as they didn’t have any ATM card on them. They were ripped of their phones and the only one thousand Naira note the guy had on him. They had also searched the lady who came on at the same time as I did. Obviously they didn’t get much from her. I was their sacrificial lamb. Soon my phone beeped – an indication that the money had been withdrawn. Then they drove back to the spot where they had dropped off the bus conductor, picked him up and drove off. By all means, it was a smooth operation, and we were home-bound now. I silently prayed that they dropped me off at a safe place. All along, I didn’t know where we were because I had been sitting on the floor of the bus. Suddenly, the bus pulled to a stop and we were all told to alight. I discovered that they had dropped us at the toll-gate. My inquisitor who had promised to give me transport money to take me home had either forgotten or couldn’t care less. They zoomed off as soon as we were all out of the bus. I stood there thinking of how to get to my place in Gbagada, until one good Nigerian who happened to be passing by came to my rescue by giving me N100, my exact fare home.”she said