TWO-term Senate President, Senator David Mark, will today know whether or not he will return to the Senate to continue with his fifth term representing Benue South Senatorial District of Benue State on the banner of the Peoples Democratic Party, PDP. So also is Senator Athan Achonu of Imo North Senatorial District, Imo State. 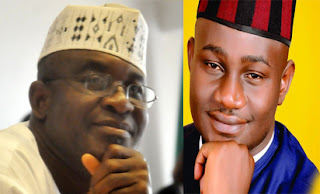 The duo will be running in two of the 22 National Assembly and state assembly re-run elections to be conducted, today, across eight states – Benue, Kaduna, Plateau, Niger, Nasarawa, Kogi, Taraba and Imo by the Independent National Electoral Commission, INEC. Mark-Onjeh Apart from Benue South and Imo North, senatorial re-run polls will be held in Kogi East and Kogi Centra


remaining 18 re-run elections consist of three House of Representatives and 15 state assembly. The Federal Constituency elections will hold in Okene/Ogori Magongo Federal Constituency of Kogi State; Lafia/Obi Federal Constituency of Nasarawa State and Kurmi/Sardauna Federal Constituency of Taraba State. And the 15 State Constituency elections will be conducted across Imo, Kaduna, Kogi, Plateau, Niger and Taraba states. They are Isiala Mbano, Oru East, and Owerri West all in Imo State; Lere West in Kaduna State ; Ofu, Ankpa 1, Idah, Dekina 1 and Dekina II (Okura) in Kogi State; Suleja in Niger State; Langtang South, Pankshin South and Pankshin North in Plateau State; as well as Ardo Kola and Mbamga in Taraba State. In Benue South, Mark will face Mr Daniel Onjeh of the All Progressives Congress, APC, the man who stopped him at the Court of Appeal among other opponents. In Imo North, Achonu, who is fondly referred to as the one-arm senator, will also aim to stop Hon Benjamin Uwajumogu of the APC, who got his election nullified. In Kogi East, Senator Abdul Abdulahi of the APC whose election was nullified to pave the way for the re-run has been barred from taking part leaving the race for Attai Aidoko (PDP) and Ibrahim Itodo (LP) among others. With Senator Muhammed Salami Ohiare (APC) also excluded in Kogi Central, Alhaji Ahmed Ogembe of the PDP, will be running against Dr. Moses Wokili of the Social Democratic Party, SDP, and Kabiru Atta of the Labour Party, LP among others. INEC distributes sensitive materials Already, the INEC has distributed both sensitive and non-sensitive materials to the states where the rerun would hold. In today’s elections, INEC said voters would undergo simultaneous accreditation and voting, a clear departure from the past. The new system which was introduced during the supplementary governorship election in Bayelsa State entails that both accreditation and voting would go side by side. In the past, part of INEC’s electoral guidelines was that accreditation would be done separately and concluded within a specific period after which voting would commence. While the system was time-consuming, it also disenfranchised many elderly and ill persons who could not withstand the rigour of having to wait for hours at the polling unit pending when voting would commence. Secretary to the Commission, Augusta Ogakwu said in line with the new procedure, voting at re-run elections shall commence at 8.00 am and close at 2.00 pm. To use card readers As to whether the commission would discard the use of smart card readers, Director, Voter Education, Publicity, Civil Society and Gender Liaison, Oluwole Osaze-Uzi told Saturday Vanguard that the commission would continue to use the technology until there is a legislation stopping its usage. “We will continue to use the card reader for our elections. It is only meant to enhance the process and not to displace or supplant the manual register. For now, there is no legislation that prohibits it, until probably when there is an electoral reform and a contrary legislation is made about its usage. The court has also not banned its usage, so we will continue to use it for the process of authentication of voter details,”, he said. In Taraba state where rerun elections would be conducted into the Kurmi/Gashaka/Sardauna federal constituency as well as Mbamga and Ardo Kola state constituencies, INEC Administrative Secretary in the state, Alhaji Mohammed Umar said the commission was ready for the election and had distributed non-sensitive and sensitive materials. According to him, only registered voters who had obtained their Permanent Voter Cards, PVCs would vote in the election.