Skip to content
There was outrage on Tuesday by pensioners of the Oredo Local Government Area of Edo State after a local government pensioner, identified as Sunday Oboite, slumped and died during screening. 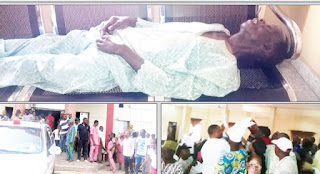 It was learnt that Oboite, 75, died at the reception of the local government secretariat.
It was gathered that the late pensioner, who retired from the Works department of the council, was at the secretariat for screening which the council had directed the pensioners to undertake before they would be paid their 10-month pension arrears.
He was said to have been offered a bottle of beverage and some water by a Good Samaritan after he complained of hunger.
He, however, slumped at about 1.20pm, before he was confirmed dead by some doctors at the council.
According to a source, his death sparked a protest among other pensioners, who were enraged by what had befallen their colleague.
The source said, “Some of them complained that they had presented themselves for screening at the secretariat at about 8am, but were later informed to go to Urhokpota Hall, about 100 metres away. They also decried the delay in the exercise, which took hours before it commenced.”
The Chairman of the council, Mrs. Sweet Ikpomwosa, could not be reached for comments.
The Secretary of Oredo Pensioners Association, Mr. James Erhunmense, said that the late Oboite had arrived at the venue of the exercise alone and complained of not having any money to buy food and drugs.
He also said that the late pensioner was unable to go to the designated hall with his colleagues but chose to wait at the reception due to tiredness.
Another pensioner, James Omorogbe, said the computers used for the screening were always shutting down, adding that it took the death of their colleague for the council to provide them with chairs.
He said the death of Oboite could have been avoided if the council officials had prepared for the screening.
“Sunday said he had no money to buy food and drugs. For 10 months now, we have not been paid. Many others have died without collecting their benefits,” Omorogbe added.
Advertisements