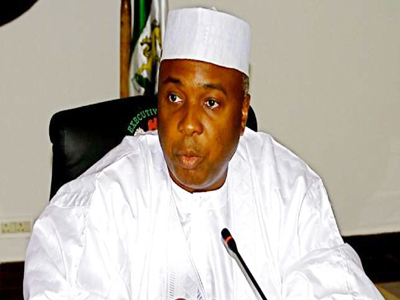 •Dr Bukola Saraki, Senate President
Can the chairman and  a member of the Code of Conduct Tribunal (CCT) conduct proceedings where the Constitution says it must be constituted by two members and a chairman?
Was the CCT wrong to have assumed jurisdiction over the trial of Senate President, Bukola Saraki, charged with false asset declaration, without one of its members?
These are some of the issues to be decided today by the Supreme Court as it delivers judgment in the appeal brought before it by Saraki.
Saraki appealed the October 30, 2015, judgment of the Court of Apeal, Abuja, which dismissed his appeal challenging the jurisdiction of the CCT to try him for alleged false declaration of assets.
Saraki was arraigned before the CCT on September 22, last year on a 13-count after initial resistance, prompting the tribunal to issue a bench warrant for his arrest.
Although he pleaded not guilty to the charge, he not only challenged the power of the CCT to try him, but the composition of the tribunal and the legality of the charge, which he said was not endorsed by the attorney general of the federation (AGF).
In its October 30 judgment, a three-man panel of the appellate court, in a split decision of two-to-one held that Saraki’s appeal lacked merit.
Justices Moore Adumein and Mohammed Mustapha resolved the six issues in favour of the respondents, including the CCT, while Justice Joseph Ekanem dissented on one issue, which was whether an official of the Federal Ministry of Justice was competent to endorse a charge in the absence of the AGF.
While Justices Adumein (who read the lead judgment) and Mustapha dismissed the appeal, Justice Ekanem upheld the appeal, discharged and quashed the Senate president’s trial before the CCT.
Justice Adumein rejected Saraki’s arguments, including his contention that the CCT, being an inferior body to the Federal High Court, ought not to have proceeded with his trial despite an order by the court.
He held that Saraki’s complaint about not being personally served with the charge “was of no consequence having appeared and taken his plea before the tribunal.”
On whether two of the CCT’s three members formed a quorum, Justice Adumein, noted a “lacuna”  in the law,  but held that the Interpretation Act provided that a member of the tribunal and its chairman could sit and conduct proceedings.
Justice Adumein upheld the argument by the respondents’ lawyer, Rotimi Jacobs (SAN),  that by Section 28 of the Interpretation Act, two members of the tribunal (including the chairman) form a quorum to validly conduct its proceedings
He also held that by Section 174(1) and (2) of the Constitution, where there is no substantive AGF, any law officer in the Office of the AGF could validly file charges.
On the tribunal not being a court, Justice Adumein held that “there is no inherent difference between the tribunal and the court.”
The Nation
Advertisements