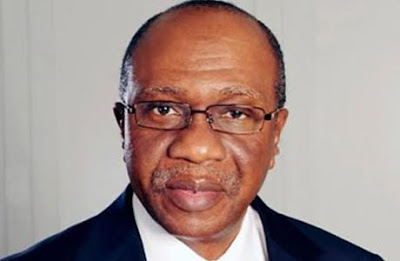 The Democratic Peoples Congress DPC, has called on the Governor of the Central Bank of Nigeria, Godwin Emefiele, to resign following the declining state of the Naira and the Economy. The party’s position is contained in a statement released by the party’s Chairman, Reverend Olusegun Peters on Friday February 19th.

“The Central Bank of Nigeria under Emefiele’s watch is confused and overwhelmed by the country’s economic downturn. His trial and error policies in recent times are classical example of voodoo economics, if not economic terrorism. “We demand his immediate resignation and re-organization of the apex bank for effective policy formation and implementation that will stimulate the national economy and steer it on the path of growth, development, advancement and prosperity. “The present crop of top CBN officers are suffering from leadership fatigue and ignorant of effective strategies to evamp the economy and restore the value and dignity of the nation’s currency, naira. “It is time for all patriotic Nigerians to stand up and be counted in the efforts to overhaul the economy and save the naira from further depreciation,” the party said.

“Nonetheless, in his defence of the ban of almost 3000 Bureau de Change from official forex allocations, Emefiele, expressed grave concern that BDC operators had abandoned the original objective to serve retail end users who need $5000 or less. Conversely, according to Emefiele, “the currency dealers became wholesale dealers in foreign exchange to the tune of millions of dollars per transaction” and then “criminally, thereafter used fake documentations, such as passports, etc to render weekly returns to CBN.” It is not clear how much tax was generated from these mega transactions.”