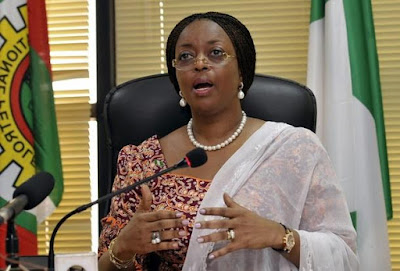 Former Minister for Petroleum resources, Diezani Alison Madueke has denied an allegation by former group managing director of the Nigerian National Petroleum Corporation (NNPC), Austen Oniwon, that she awarded $24 billion oil swap deals without a contract during her tenure as Petroleum Minister. Oniwon made the allegation when he appeared before the House of Representatives ad hoc committee on Petroleum resources.
In a statement released by her spokesperson, Clem Aguiyi today February 24th, Diezani denied the allegation and said she will speak in due time

“Following the recommendation of the then GMD of NNPC, the minister approved OPAs for a new term of 2 years commencing from 1st January 2015. The entities recommended by NNPC were Sahara Energy Resources Ltd, Aiteo Energy and Duke Oil. NNPC strongly recommended and outlined the benefits of the OPA over the SWAPs and put forward the case for migration from the OPA and crude exchange (SWAP) Contracts to OPAs fully. NNPC posited that the ‘experienced benefits of the OPA to the Federation’, would be much greater. There would have been little need to respond to this particular issue at this time considering that the former minister is still indisposed and would have wished to be left alone to recuperate. She will speak for herself in due time. It is nevertheless imperative that records are set straight so that Nigerians and posterity will know the truth. Mr. Oniwon was right when he stated that the 445000 barrels of crude oil were the property of NNPC, bought from the federal government of Nigeria at the prevailing rate and therefore as GMD, he did not need the Federal Executive Councillor Presidential Approval to enter into SWAP arrangements that will enable NNPC fulfill its statutory obligations. It was also correct that contrary to the picture being painted in the media, not more than 210,000 bpd out of the 445000 bpd lifted by NNPC to ensure adequate supply and distribution of petroleum products were traded under the SWAP arrangement. What the GMD required to execute the above was statutory approval from the minister for the companies! Refineries chosen by NNPC to participate in the SWAP arrangement as outlined in section 4 of the Petroleum Act and section 20 of the NNPC Act. It is however incorrect to say that the former minister gave ‘approval for extension’ unless ‘extension’ can legally be substituted for “renewal” because what the Minister gave (and the records are there) was approval for ‘renewal of contract’. And these approvals were given based on letters of request received from the GMD of NNPC.”the statement read