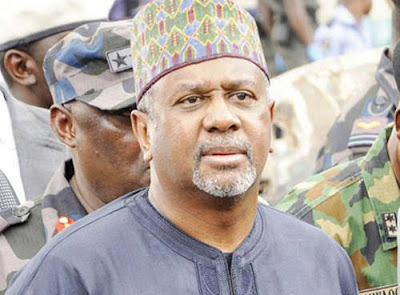 Former
National Security Adviser, Sambo Dasuki, today told a Federal High Court in
Abuja that he was not ready for his trial to be continued. Speaking at the
hearing of the money laundering charges filed against him by the Department of
State Security DSS today February 16th, speaking through his Counsel, Joseph
Dauda, Dasuki said he will not be available for the trial until the Federal
government obey the court orders that granted him bail last year.

Dasuki was re-arrested by the
DSS on fresh charges of money laundering and illegal possession of firearms
after he had fulfilled bail conditions for separate charges filed against him
by EFCC.

Counsel to Dasuki, Joseph Dauda, while
presenting his argument to the judge, said “We cannot be ready for trial until
the defendant enjoys his constitutional rights.

We apply that we should be given time to prepare
the defence. The conduct of the prosecution has not enabled him to enjoy his
constitutional rights. The worst is that for about seven weeks we do not know
where he is. Any of us here who proceeds to defend an accused person in this
circumstance may lose his license of practice.

The ex-NSA, who
was re-arrested by the the operatives of the Department of State Service on
December 29, 2015, shortly after meeting the bail conditions granted him by
other courts, spoke through his lawyer, Mr. Joseph Daudu (SAN), on Tuesday.
He maintained a
blank expression even when his lawyers and the Federal Government’s prosecutor,
Mr. Dipo Okpeseyi (SAN), disagreed during the proceedings.
‎‎‎‎
The Federal
Government, through the office of the Attorney-General of the Federation is
prosecuting Dasuki before Justice Adeniyi Ademola of a Federal High Court in
Abuja on four counts of money laundering and illlegal possession of firearms.
‎
The Economic
and Financial Crimes Commission is also prosecuting the ex-NSA along with
others before two judges of the FCT High Court in Maitama, Abuja, on separate
sets of 19 counts and 22 counts ‎of diversion of money meant for procurement of
arms.
On
Tuesday, Dasuki’s lawyer, Daudu,  informed Justice Ademola that on the
account of alleged disobedience of the orders granting his client bail, he had
filed an application  seeking the termination of his trial on the charges
of money laundering and illegal possession of firearms.
Dasuki had
filed similar aplications before the two FCT High Court in Maitama Abuja where
separate sets of charges are pending against him and others.
But the judge
presiding on the ex-NSA’s trial with respect to the 19 counts involving the
alleged diversion of the N32bn arms fund, had ruled on the application on
February 8, that the EFCC was not in violation of the order granting Dasuki
bail.
The judge also
ruled that his order granting bail to Dasuki did not exempt him from being
re-arrest on account of any further investigation, adding that the order had
been co‎mplied at the point of his re-arrest by the operatives of the
Department of State Service shortly after he was released on prison.
Despite the
ruling by Justice Yusuf, similar application is coming up before Justice Peter
Affen, who presides over the case involving 19 counts of diversion of N19bn of
arms fund, on February 26‎.
Daudu insisted
before Justice Ademola on Tuesday that the Federal Government had violated the court’s
order granting bail to his client.
“There is a
pending motion on notice which is to say that a person in disobedience of court
order cannot enjoy any act of indulgence of the court,” he said.
He said he had
not been able to gain access to the ex-NSA to enable his team engage his client
for adequate preparation for his defence.
He said his
application sought to prohibit the Federal Government from continuing to
prosecute his client, adding that by further indulging the prosecution, which
was allegedly in contempt of the orders of the court, to go on with the case‎,
would amount to “mockery of the judiciary” and “an assalut on the rule of law”.
He asked for an
adjournment to file a response to the prosecution’s reply to his client’s
application.
But in
response, prosecuting counsel, Okpeseyi oposed the application for adjournment
as he also denied the alegation of disobeying court order.
He said, “The
accused person is not being detained because of the matter‎ before this
honourable court. So it will be wrong to say that the prosecution is adamant to
keep him in custody.”
‎He also urged
the court to direct that hearing of the application should go on as the lead
defence counsel could make his final rely orally.
But in his
ruling, Justice Ademola granted the application ‎for adjournment and directed
that the defence should file its final reply within seven days.
The judge
adjourned till March 3 and directed that the prosecution must produce the
ex-NSA in court at the next sitting and subsequent ones.
The judge also
said he would deliver a pending ruling on an application by the prosecution for
witness protection on March 3.
Advertisements