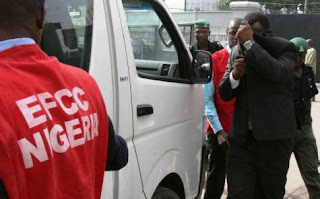 Also remanded was the Bishop of Maranatha Church, Jonas Katung, who was charged alongside Jatau by the Economic and Financial Crimes Commission, which accused them of defrauding hundreds of depositors.

The accused were slammed with 24 counts before Justice Musa Kurya.

Joined with them in the charge are one Okewole Dayo and Dadin Kowa Microfinance Bank Limited.

The EFCC alleged that the defendants conspired to defraud over 64,000 customers of the defunct Covenant Fadama Cooperative Society to the tune of   N11.5 bn.

They were also accused of transferring the sum of N50m from Covenant Fadama Cooperative Society account to a First Bank account, with number 2003050001625, into the Dadin Kowa Microfinance, First Bank account Number-2016452671.

But when the charges were read to them, all the accused persons pleaded not guilty, except Bishop Katung, who pleaded guilty to one of the counts before he suddenly changed his mind and pleaded not guilty like others.

Katung had earlier on December 9, 2015, been granted bail before the case was adjourned till Wednesday.

According to the EFCC, the charges against the bank MD were only filed two days before.

However, while opposing the bail application, the prosecuting counsel argued that the bail granted to the first accused person should also apply to the bank MD since he is one of the co-accused persons in the entire case.

After hearing the argument from the defence and prosecution counsel, the presiding judge ruled in favour of the prosecution and ordered that the bank MD be remanded in prison pending when his bail application would be filed and considered by the court.

The case was adjourned till March 7 for further hearing