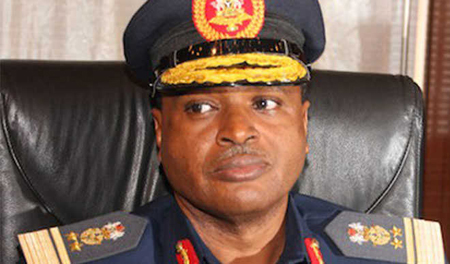 Possible locations of the abducted Chibok school girls may have been identified by the Nigerian Air Force ,according to indications last night.
The Director of Public Relations of  the Air Force, Group Captain Ayodele Famuyiwa, told Channels Television that the force has therefore  abstained  from attacking the identified areas to avoid hitting the girls.
The  latest aerial bombardment of Sambisa forest,Famuyiwa said, had been aimed at the logistics base of the Boko Haram sect and not areas where the Chibok girls could be located.

He said:“We have no fears that the girls are not there because hat particular location has been under surveillance for quite a while and we suspected maybe it’s a kind of ammunition depot or maybe a workshop that they are using as their logistics place.
“Once you take off the logistics base, of course you gradually weaken the resolve of the enemy to be able to prosecute any campaign.”
Group Captain  Famuyiwa said the military  is deploying  the  Unmanned Aerial Vehicle (UAV) to maximum use in its battle with Boko Haram  because it is cheaper to run  and reduces   lives.
The UAVs,he said : “have the capability to be airborne for up to eleven hours and they are quite cheap to maintain. So, we have been able to employ the UAV to a great extent to carry out reconnaissance and surveillance basically for intelligence gathering on the activities of the Boko Haram.”
He said that the UAVs have also helped the Air Force to understand the terrorists’ pattern of movement and “how to be able to counter them should they want to strike or spring any surprise”.
The girls were abducted from the Government Girls Secondary School,Chibok,Borno State.
Ex-President Olusegun Obasanjo said last week that the girls may never be found again.
Advertisements