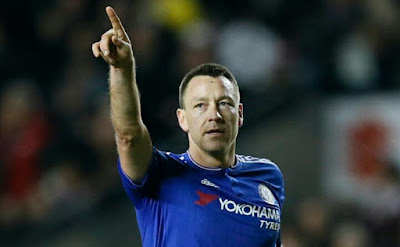 The 35yr old captain who has played for Chelsea all his life as a professional footballer has revealed that the club has refused to offer him a new deal and that he will be leaving at the end of the season.
John Terry in a press statement revealed that though he will be leaving Chelsea, he will move to a foreign League as he wouldn’t want to face his beloved club. He also vowed he’ll try to bow out on a high with FA Cup success. Read his press statement after the cut… 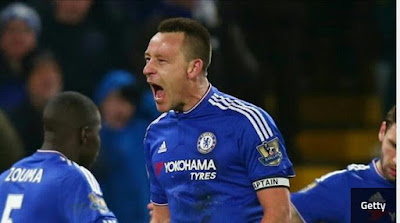 “To be honest, I was in last week before the Arsenal game and it’s not going to be extended. It’s my last run in the FA Cup so I want to make it a good one,” he said after the 5-1 FA Cup victory over MK Dons.
“It’s a big season for me and I want to push on – not just in this competition but in the Premier League as well. I knew before the Arsenal game so mentally I’ve kind of accepted it. We just have to move on.
“They said that when the new manager comes in, things might change. It’s a no at the minute. I needed to know now like I have done every January and sometimes it takes a couple of months to get done.
“Unfortunately it was a no. It’s not going to be a fairytale ending, I’m not going to retire at Chelsea. It’s going to be elsewhere, which it took me a couple of days to get over.
“But like I say, I knew before the Arsenal game and my performance isn’t going to change – the way I train, what I give for the club. I want to give everything and finish on a high, on 100 per cent good terms with the club.

“We spoke about my legacy and coming back to the club when I finish. The most important thing now is to get us up the league.
“I didn’t feel as though I was playing great in the first four or five games of the season, like everyone in the team, and the performances showed that. But since then myself and everyone else has picked up back to where we are. All I can do is keep my head down and plug on because it’ll be my last year at the club.
“The club will move on. No player is ever bigger than the club. Ideally I would have loved to stay, but the club’s moving in a different direction. No doubt they’ll sign one or two great centre-backs.
“I want to come back as a Chelsea supporter in years to come with my kids and see the team doing great. Unfortunately that’s not going to be with me, but I want to see the team do well. It’s going to be my last year and I want to go out at the top.
“I couldn’t play for another Premier League club, I couldn’t do that to the Chelsea fans. It will be elsewhere for sure. I don’t know where and I leave that to the people in charge. It certainly won’t be in the Premier League.
“My agent made the call like we do every January. He got told over the phone and I called to set up a meeting the following day. The club immediately set that up, which was great of them to do that. I wanted to hear it face to face. They told me.
“I feel as though I’m in great nick, I’m playing great and I’ve got a couple of years to go. It’ll just be elsewhere.