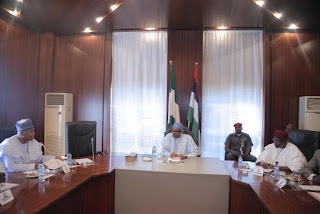 President Muhammadu Buhari has ordered the complete purge of the Budget Office because of the discrepancies and padding of the 2016 budget,
the President handed down the directive following the embarrassment that the budget discrepancies had attracted to his government. source said Buhari had been properly briefed of the activities of government officials in the Budget Office who were described as “budget mafia” and accused of sabotaging the budget process.

He said that a decision had been taken that while many of the identified officials would be sacked, the remaining ones should be posted out of the office.
The Head of Service of the Federation, Mrs. Winifred Oyo-Ita, had been directed to implement the presidential directive and communicate the decision to the affected officials.
The source said, “The President is really angry over the discrepancies discovered in the 2016 budget. It has been confirmed that it was a clear case of sabotage. It was said to have been carried out by a budget mafia whose members are strongly enshrined in the office.
“The President’s decision is that the former Director-General should not be the only casualty in this matter.He has ordered that the Budget Office should be purged. Many of the officials there will be sacked while others will be transferred to other places other than where they have already constituted themselves to a mafia
Advertisements