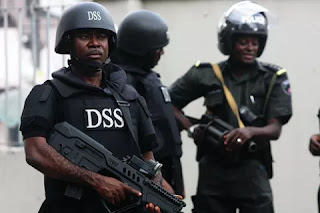 A traditional ruler in Bayelsa State has petitioned the State Security Service over the “unlawful invasion” of his Abuja home by SSS operatives.
Amalate Johnnie Turner, the Obanema of Opume Kingdom, said the operatives invaded his private residence on February 8 in what he described as a violation of his constitutional rights.
“The incident was so disturbing to our client particularly when there is no allegation that warrants the invasion of the officers from your department against him,” Mr. Turner said in the petition through his lawyer, Kayode Ajulo, and dated February 10th.
“More specific is that there was no time formal and/or informal invitation was extended to him at any point in time whatsoever to report at your office for questioning in any capacity nor was any valid search warrant presented to him, his agent, privies or any one whatsoever acting on his behalf ordering the search of the said residential premises.”

Armed SSS operatives‎ stormed Mr. Turner’s Maitama home last Monday and reportedly carted away some vital documents.
Mr. Turner is a close associate of former president Goodluck Jonathan
The monarch said the incident was reported in the news and on social media as the treatment meted to him was a derogation of his dignity as a “respected first class traditional ruler in this country.”
“This action has cast a serious doubt‎ on the integrity of our client as the signal given to the public is that this respected first class monarch is a common criminal because in civilized climes, elder statesmen and law abiding citizens are accorded their due respect.”
Mr. Turner demanded a “full explanation” from the SSS regarding the invasion of his home within seven days or he would institute a legal action against the agency.
‎Earlier, the Committee for Defence of Democracy had condemned the raid on Mr. Turner’s home, describing it as a political vendetta.
“Consequent upon the latest action of the SSS invading the residence of King A.J Turner, the civil society situation room is issuing a 24-hour ultimatum to the DSS to desist from this glaring war against the South-south region, particularly allies of Jonathan,” the group had said in a statement.
“If so much honour and respect can be accorded to the traditional institutions in the North and Yoruba land, same institutions in the South-south cannot be subjected to ridicule in the name of political vendetta.