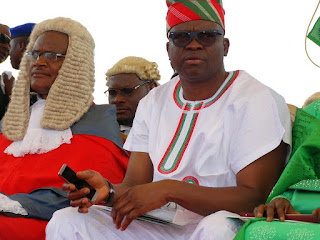 The governor of Ekiti state,
Ayodele Fayose, has dared President Muhammadu Buhari to arrest him.
Mr. Fayose said Mr.
Buhari is a dictator.
“They say he
(Buhari) is coming after me, I am ready,” Mr. Fayose said, Friday, during an
interview on The Osasu Show which was broadcast on AIT.
Mr. Fayose in the
interview made reference to the Holy Bible – Hebrew 13: 6 – and said “it is
very clear that because we have God, we fear not what men will do to us”.
The governor, who
is one of the fiercest critics of Mr. Buhari, said everybody can’t belong to
the same political party, and that he was entitled to his view. “You can’t
silence everyone,” he said.
The Ekiti governor
in the interview questioned the capacity of Mr. Buhari to solve Nigeria’s
economic crisis.
He said Mr. Buhari
was “still in an analogue stage”, and that the president was clueless on the
nation’s economy.
“I
am saying it expressly, (that) the president does not understand the economy,”
said Governor Fayose.
“If you understand
the economy you can do everything simultaneously without rocking the boat.
“You go out telling
the whole world that your country is corrupt, you destroy all your people, and
you expect them (foreigners) to do business with your people?
“That is not how to
operate,” said Mr. Fayose.
The Ekiti governor
insisted that President Buhari’s war against corruption was selective and
political.
He said, “When
(former Nigerian president) Obasanjo left prison, did he declare his assets?
“The library
Obasanjo has today, where did the money come from? His house in Abeokuta, where
did the money come from?
“Even Buhari
himself declared cattle and mud houses. He said he doesn’t have money. From
where did the (presidential) campaign money come from?”
Mr. Fayose said
Nigerian leaders weren’t committed to the idea of diversifying the country’s
economy.
“Each of them looks
forward to another election rather than look forward to the future of the
country,” he said.
The governor also
identified lack of electricity power and other infrastructure, including lack
of capital, as the major factors against economic diversification in Nigeria.
“If I want to
diversify, for instance, the money I got for last month was N1.3 billion. And
my wage bill is N2.6 billion, aside security, electricity, water and basic
essential services to the people.
“Do I use this
money for diversification at the expense of the people?
“No I can`t!
“So,
it is an uphill task. It is not impossible, but it an uphill task.
“My first counsel
to the federal government is that they should stop the noise about corruption,
and face this economy.
“They should be
sincere more about the economy than playing to the gallery,” Governor Fayose said.
The governor
advised the federal government to make agriculture attractive to farmers all
over the
Advertisements