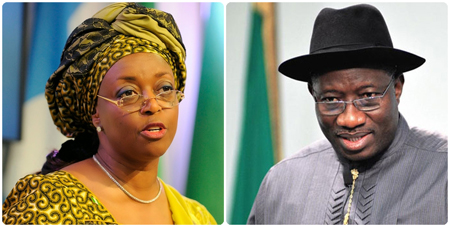 I acted within my powers, says ex-Minister Mohammed
The Senate is exploring ways and means of invoking sanctions against former President Goodluck Jonathan and some former ministers for allegedly appropriating reserved plots of land in Abuja.
According to the Senate Committee on the Federal Capital Territory (FCT), the plots acquired by Jonathan and his ministers were designated as green areas, flood drains, city buffers, recreation centres, sewage lines, urban farming and city monuments.
At a briefing yesterday, the chairman of the Committee, Senator Dino Melaye, said the illegally acquired areas fall within the highbrow Maitama District.
Describing the action of Jonathan and his ministers as “satanic”, Melaye blamed the immediate past former Minister of the FCT, Senator Bala Mohammed, for the “indiscretion”.
Besides Jonathan, the committee listed other beneficiaries of the “land grab” to include former Petroleum Minister Mrs. Diezani Alison-Madueke and former Justice Minister Mohammed Adoke.
Other beneficiaries include former Trade and Investment Minister Olusegun Aganga; Acting National Chairman of the Peoples Democratic Party (PDP), Uche Secondus and FCT Executive Director Ismaila Adamu.
Some of the beneficiaries have started erecting structures on the plots, which were “hurriedly allocated” in the twilight of the last administration. Certificates of Occupancy were hurriedly issued for the plots, the committee alleged.
Melaye said: “Senator Bala Mohammed, in his bid to satisfy some powerful Nigerians before the end of his tenure, disregarded the wisdom of his predecessors and the vision of the founding fathers of Abuja.
“He went ahead to implement Messrs Fola Consult Limited’s recommendation by allocating these important features/endowments, including the Maitama Hills, to these powerful Nigerians.
“It is pathetic to state that one of the allottees has erroneously burst a sewage conduit pipe and the entire area messed up with offensive odour which could trigger off serious epidemic within that location.”
Faulting Mohammed’s defence of the allocations, Melaye said the former minister’s action amounted to maladministration, adding that “it is satanic “.
He added that the committee plans to put a Stop Work Order on the various construction sites on the plots. Besides, the beneficiaries are to replace all the trees they felled during construction.
But Mohammed said the committee was misinformed on the allocations.
In an advertorial published in some national dailies, the former Minister said he never acted outside the limits of his powers.
In the advertorial, signed on his behalf by his Media Consultant, Mr. Emma Agu, Mohammed insisted that the Abuja Master Plan had never been inviolable.
According to him, the Abuja Master Plan is a dynamic road map for the city’s land use and infrastructure development, guided by the demands of change and time.
He added that his actions were informed by the need to ensure full utilisation of available resources and that the allocations were made in compliance with the Land Use Act.
According to him, construction was approved after the allottees had obtained building plan approvals from the Department of Development Control of the FCT.
He urged the Senate committee to seek adequate information from the FCT administration, stressing that the allocations could only be reversed by an incumbent Minister of the FCT.
Advertisements