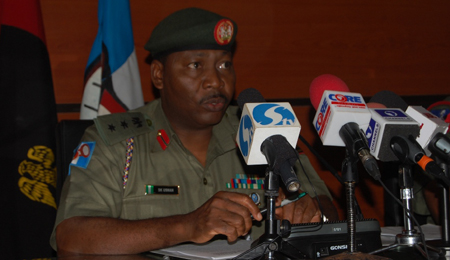 The Army last night released 12 senior officers to the Economic and Financial Crimes Commission (EFCC) for probe.
The EFCC is investigating their role in the $2.1billion arms deals.
Those found guilty of fraud by the EFCC will be tried by a Military Court Martial, The Army said.
A statement by the Acting Director of Army Public Relations, Col. Sani Kukasheka Usman, which did not release the names of the affected officers, said: “The Nigerian Army wishes to inform the public that 12 Army officers have been sent to the EFCC for investigation.
“These comprise three serving Major-Generals and one retired, three Brigadier-Generals, four colonels, and one Lieutenant Colonel.
“However it should be noted that at the end of the commission’s investigations, those found culpable will be tried by a Military Court Martial
Advertisements