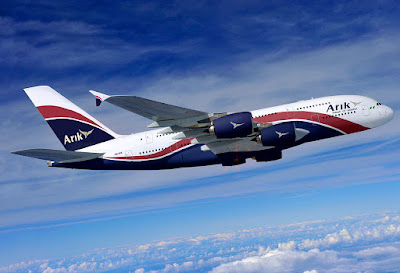 Barely 48 hours after a middle-aged female passenger was found dead in a toilet at the Murtala Muhammed International Airport, Lagos, another female passenger, on Friday, died aboard an Arik Air flight 749 from Port-Harcourt to Lagos.

A 39-year​-​old pregnant woman was on Friday confirmed dead on board an Arik Air flight from Port Harcourt to Lagos.
The deceased, identified as Ijeoma Nwokedi, was confirmed dead on arrival by the medical personnel at the Murtala Muhammed Airport Domestic Terminal One, Lagos.
A reliable source told the News Agency of Nigeria (NAN), that Mrs. Nwokedi was travelling with her husband and a cousin.

The source said the deceased had developed complications mid-air and was attended to by some medical personnel on board the flight.
Arik Air, in a statement by its spokesperson, Ola Adebanji, confirmed the incident.
“A female passenger on board Arik Air’s Port Harcourt-Lagos flight was confirmed dead by medical personnel on arrival this morning at the Murtala Muhammed Airport Domestic Terminal One, Lagos.
“The lady boarded the flight from Port Harcourt in company of her husband and cousin. The cause of death is yet to be ascertained,” the statement said.
NAN recalls that another unidentified female passenger died on Thursday in one of the toilets of the Murtala Mohammed International Airport.
(NAN)