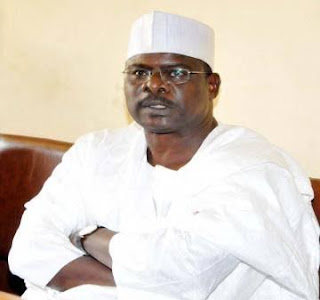 Senate Majority leader, Senator Ali Ndume says he is willing to testify against former National Security Adviser Sambo Dasuki and all those indicted in the $2.1billion arms deal at the International Criminal Court, ICC. Ndume said this in an interview with Daily Trust, while applauding the efforts of human rights Lawyer, Femi Falana, who says he will be approaching ICC to try all those indicted in the fraud with charges of War crimes

“As far as we are concerned, these people shared blood money. Borno elders have made our position known on this through a statement they issued. We stand by our elders’ statement, that anybody who shared from the money meant for the purchase of arms to fight Boko Haram, is part of the sect, or they are sponsors of the sect. There are classes of Boko Haram – the army of Boko Haram, the supporters of Boko Haram and the sponsors of Boko Haram. Those people that shared the money for the purchase of arms are part of Boko Haram. We are supporting the government in the investigation and recovery of the funds. In fact, we are saying the government should take the case to Hague. We are very glad that somebody in the person of Femi Falana, a Senior Advocate of Nigeria (SAN), has taken the case further by going to the International Criminal Court (ICC). Kudos to him. If need be, I’m willing to testify at the ICC against those who collected the money meant for the Boko Haram war. This is because I am a victim too. We stand by Falana and we are going to support him to pursue the case at the ICC. We are not surprised that Falana has taken the case further because he is always by the side of the oppressed”.

“Dasukigate is not a witch-hunt because it is a fact that they shared the money meant for the Boko Haram war. Is the money stolen or not? They stole the money and they must be prosecuted for it. It has gone beyond politics. Apart from Falana, the international community has commended the country for trying to recover the arms money. John Kerry in particular said they were in total support of Nigeria.”