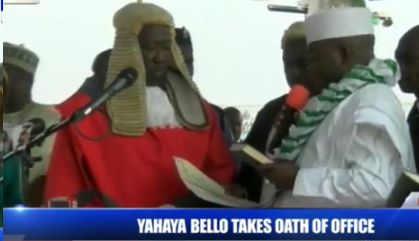 Yahaya Bello has been sworn in as the governor of Kogi state. He was
sworn in this morning at a ceremony still happening in the state.
Yahaya became governor in a controversial supplementary election that
was conducted after APC’s governorship candidate, Prince Audu Abubakar,
died suddenly during the governorship election in November last year.

Meanwhile James Faleke who ran as deputy governor with Abubakar did not attend the ceremony.