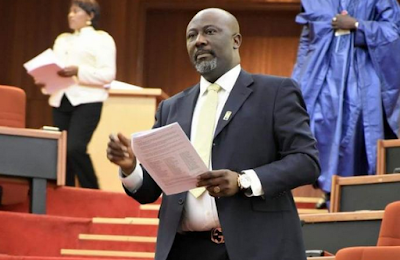 Sen. Dino Melaye says he respects former President Olusegun Obasanjo but called him out for allegedly introducing bribery to the National Assembly. According to a report by TheCable, Dino said this while reacting to the letter Obasanjo sent to members of the Senate on January 13th where he berated them over their plans to buy more cars. He said;

“I have tremendous respect for president Olusegun Aremu Okikiola Obasanjo. Elder statesman, respected pan Africanist and committed patriot. I went through the letter written to all senators and members of the house of representatives. The letter I can see is a misplacement of anger,” he said.

“Our leader is mistaking the eighth national assembly as the same senate assembly that defrauded him in 2007. Those who collected his money and refused to implement the 3rd term agenda. I appeal to baba that we are not the ones please. After nine years of that bribery saga, the first of its kind, I expect forgiveness to have taken place. There was the case of bribery introduced by the Obasanjo regime in the desperate attempt to remove speaker Ghali Umar Na’abba from office then. In fact, there was open display of that bribery money on the floor of the house. That government exposed the national assembly to corruption and easy money. I hope this is not in an attempt to cover up and distract attention from the Halliburton and Siemens corruption allegations. While I am against corruption anywhere in Nigeria, I will not support accusations based on anger and vindictiveness. The eighth senate should also look inwardly and purge herself of all the deliberate misgivings of the past. Nigeria must work and we must support the anti corruption stand of the Buhari administration. God bless Nigeria