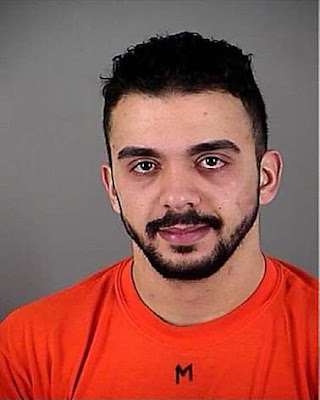 A Milwaukee man arrested on a charge of trying to buy machine guns to
carry out an attack on a Masonic temple also wanted to travel to the
Middle East and kill Israelis but abandoned that plan as unworkable,
federal agents said in court documents.
Federal prosecutors charged 23-year-old Samy Mohamed Hamzeh on Tuesday
with unlawfully possessing a machine gun and receiving and possessing
firearms not registered to him.

The FBI recorded conversations between Hamzeh and two federal informants
talking about an attack on a Masonic temple in Milwaukee, according to
an affidavit setting out the evidence against Hamzeh.

He and the two informants traveled to a gun range on Jan. 19 and
practiced with a pistol, the affidavit said. Afterward they took a tour
of a Masonic temple, which federal authorities declined to identify.
Masons are members of a fraternal organization that carries out a
variety of activities, including charity work. Wisconsin has nearly
11,000 Masons in 180 lodges, according to Frank Struble, grand master of
Free and Accepted Masons in Wisconsin. The organization is not a
religion.

According to the affidavit, agents were tipped off in September that
Hamzeh planned to travel to Israel in October to attack Israeli soldiers
and citizens in the West Bank. He abandoned those plans due to “family,
financial and logistic reasons,” the affidavit said, but refocused his
efforts on a domestic attack.

Federal agents said that on Jan. 19 and into the early morning of Jan.
20, Hamzeh discussed his plans to attack the temple with the informants,
telling them they needed two more machine guns — the group apparently
already had one — and silencers. They planned to station one person at
the temple’s entrance while the other two went through the building,
killing everyone they saw. They then planned to walk away from the scene
as if nothing had happened, the affidavit said.

“I am telling you, if this hit is executed, it will be known all over
the world … all the Mujahedeen will be talking and they will be proud
of us,” Hamzeh said, according to the affidavit.

Hamzeh added that he hoped to kill 30 people, “because these 30 will terrify the world.”
According to the affidavit, Hamzeh met with two undercover FBI agents
Monday. They presented him with two automatic machine guns and a
silencer. He paid for the weapons and silencer in cash and put them in
the trunk of his car, the affidavit said. The agents then arrested him
and recovered the guns and silencer.

Hamzeh had been fired recently from his job as a trainer at a downtown
Milwaukee gym, said Delia Luna, the owner of the9Round Kickbox Fitness.
She said he was “very intense, very militant” as a trainer.