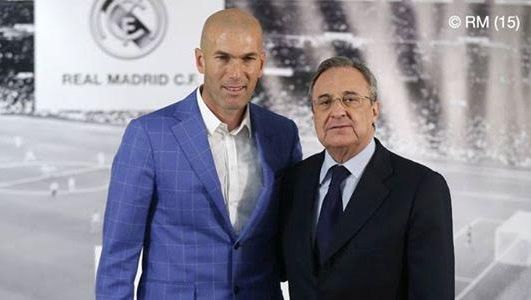 Zinedine Zidane has been unveiled as the new coach of Real Madrid. The
club’s president, Florentino Pérez, revealed the appointment at a press
conference held at the Santiago Bernabéu otoday following the conclusion
of the meeting of the club’s Board of Directors:

“Good evening, first of all thank you to everyone for being here at the
Estadio Santiago Bernabéu. I appear before you to announce the
agreements just reached by the Board of Directors of Real Madrid. Today
we have made the difficult decision, particularly for me, to terminate
the contract of Rafa Benítez as first-team coach.
I wish to underline that he is a great professional
and a magnificent person, and I would like to take this opportunity to
place on record my gratitude to him for his hard work and dedication
during his months as coach of Real Madrid”.

I would also like to announce that the Real Madrid Board of Directors
have decided to name Zinedine Zidane as the new coach of the first team.
There can be no doubt that Zidane is one of the game’s all-time great
figures. He knows better than anyone just what it means to lead the Real
Madrid first-team squad. He’s fully aware of how tough and at the same
time how exciting this demanding position is. Furthermore, Zidane knows
the players, as many of them lifted the club’s tenth European Cup in
Lisbon with him as assistant coach”Declaimer: Opinion expressed in comments are those of the comment writers alone and does not reflect or represent Koko Level’s.