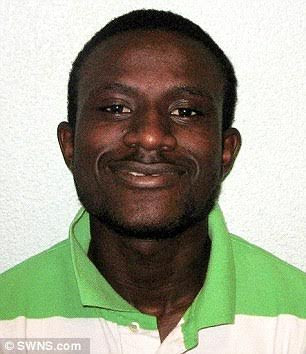 22-year-old Oluwadamilare Baiyewu pictured above has been sentenced to
24 years imprisonment by a Woolwich Crown Court in the UK for raping a
17 year old girl while trying to attack another on December 2nd last
year. Described as a ‘dangerous, calculating and predatory rapist’ who
created the image he was the ‘pillar of the community’ by helping out at
the church.

Baiyewu who resides in Fairlawn in Greenwich, first grabbed a
17-year-old girl at knife point on December 2nd, but she managed to
break free and escaped.

A week later, in the same area of Binsey Walk,
Thamesmead, he grabbed another victim, also 17, as she got off the bus
at 7pm. He put a knife to her throat and threatened to kill her before
marching her into a bin storage area under a walkway. He then raped her
in a secluded area. He was tracked down after DNA on the semen found on
the young lady was linked to him.

He was arrested on December 16, and was placed on an identity parade
where he was picked out by the victim whom he had attempted to rape.‎

He will serve a minimum of 16 years in prison and will then be on license for eight years
.

Detective Constable Chris Hammond of the Sexual Offences,Exploitation
and Child Abuse Command while speaking on his conviction said:

‘Oluwadamilare Baiyewu is a dangerous, calculating, predatory rapist. He
volunteered at a local church, creating the image that he was a pillar
of the community, which I believe was an attempt to mask his true nature
as a sexual predator. I would like to praise his victims for having the
strength to come forward to police and give their evidence in court.
The streets of Thamesmead are now a safer place without the presence of
Baiyewu. Despite the overwhelming evidence against him, Baiyewu refused
to accept his guilt. He manipulated thelegal system to cause two trials
to be adjourned which caused both victims further distress. I would like
to thank the two victims in this case who maintained their commitment
to the prosecution despite Baiyewu’s deliberate attempts to prolong
proceedings. Thankfully their will to see Baiyewu pay for his crimes
enabled the trial to proceed at the third attempt and Baiyewu was
rightly convictedof all charges.”