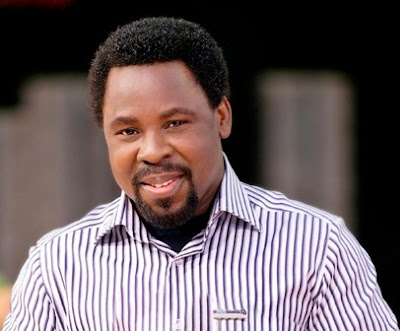 After an eight month absence, Nigerian ‘Prophet’ T.B. Joshua returned to
his Lagos-based church, The Synagogue, Church Of All Nations (SCOAN),
on Sunday 3rd January 2016 with more prophetic revelations concerning
Africa.
Speaking on the Nigerian political scene, Joshua
declared that a minority party would soon rise to significance. “One of
the minority parties will be lifted up and reckoned with,” he told
congregants.

“Let us pray for God’s love and unity in Nigeria.”

It would be recalled that Joshua allegedly predicted the rise of the
current ruling party, All Progressives Congress (APC), in 2010.

Joshua further called for prayers for Nigeria’s new Agriculture
Minister, Audu Ogbeh. “We have to pray for God to sustain him because
much is expected from him,”Joshua declared, alluding to his earlier
advice for the government to invest heavily in the agricultural sector.

The cleric also ‘prophesied’ extensively concerning Southern Africa and
the challenges the region would face in 2016, particularly the farming
industry.

“There will be little rain at the wrong time, which is not good for
farming,” Joshua warned. “Many farmers will be discouraged,” he
continued, calling on the government to build “dams and irrigation
mechanism using available water from the sea.”

He further warned Southern African nations not to yield to any
temptation to surrender their industries to foreign companies because of
the challenges that would arise.

Speaking in his usual parabolic tone, Joshua called for prayers for the
regional leaders as “the ending of February to April are very peculiar
months in the Southern African sub-region.”

Joshua further gave a global warning concerning the volatile North
Korean leader Kim Jong-un. “I am seeing an ‘arrow’ from there and it
will affect the world,” he declared, adding that North Korea possessed
weaponry that most countries were unaware of.

“The war we are fighting already in Syria is still there. We cannot
afford another one again,” he stated, calling for those involved to
embrace peace.

“There are going to be unusual, uncommon challenges this year 2016 but
in challenges, we children of God flourish,” he added, encouraging
congregants and viewers of his popular television station Emmanuel TV.

Followers of the Nigerian ‘Prophet’ were delighted to see his return to
the pulpit, claiming his unusual prolonged absence was for ‘spiritual
fortification’.

“Can you see that your pastor did not go on holiday,” Joshua jokingly
told the crowd after he had moved in the midst of the huge congregation,
ministering ‘deliverance’ and ‘prophecy’.

The service had over 3,000 foreigners in attendance, including those who
had travelled from the Eastern European nations of Ukraine and Russia.

Joshua’s last public appearance at The SCOAN was in April 2015, shortly
before his ‘Miracle Crusade’ in the Aztec Stadium in Mexico City which
allegedly attracted over 150,000 attendees.